Poor bear the brunt of cold 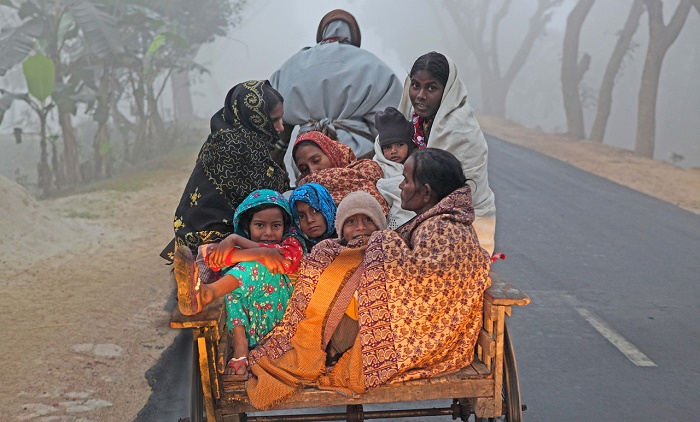 While for many winter has arrived as the season of weddings, picnic, stylish warm clothes, badminton games and pithas (cakes), it is like a hell for the poor people as their sufferings know no bounds due to the bone-chilling cold.

A sudden drop in temperature and dense fog at night has made the life of poor people, particularly, rickshaw pullers, day labourers, street children and deserted elderly people miserable.

A fresh spell of cold wave is sweeping across the country, especially the north-western region seriously affecting the life and livelihood of the poor people. People of many districts in the region are being forced to limit their outdoor activities.

Sale of warm clothes, room heaters, and other winter-related products has increased due to the biting cold.

Hospitals are witnessing sudden rise in the number of patients, especially children and the elderly affected with various cold-related diseases, according to hospital sources.

Besides, many poor people, while talking to the Daily Sun, said they are struggling to run their families as they cannot go out of their house to earn their daily bread.

“We’re leading a very miserable life due to the biting cold. We’re counting time to see the end of winter,” Quddus Mollah, a day labourer in Rangpur, said.

While visiting some train and bus stations, markets, parks, footbridges, and footpaths in the capital at midnight, this correspondent saw many floating people there shivering with cold.

Winter has turned unforgivably harsh for them as they are being compelled to spend long foggy nights with no warm clothes to shield them from the biting cold.

A woman and her six-month-old child were found sleeping on the Farmgate footbridge wearing a torn cardigan and a thin worn-out sweater.

Around 15 to 20 homeless people were seen preparing to sleep in a row on the footpath on Dhaka University campus.

Wrapping with a mosquito net and quilt, Khodeza Begum, a septuagenarian woman, was found trying to protect herself from the cold there.

“I’m alone and helpless. I get something to eat if anybody provides me food. Otherwise, I remain starved. The icy wind of winter has made the life miserable for poor people like us,” she said.

A large number of floating people sleep in Kamalapur Railway Station every night.

Some homeless people beside a railway platform were seen huddling around fires lit with dry leaves, wearing torn clothes to protect themselves from the chill.

Shahjahan Mia, a middle aged mineral water and juice seller at the station, said, “I have only one piece of warm clothing. Therefore, I try to find a place to sleep where the flow of wind is much less. Sometimes I light a fire to get some warmth.”

Winter forces these people to make difficult choices. If they buy warm clothes, they will have nothing to eat for survival, some floating people say.

Asked about the steps of the government to ease the sufferings of cold-hit homeless people, State Minister for Social Welfare Ashraf Ali Khan Khasru said it is impossible to arrange shelter for the floating people.

“We have repeatedly tried to take these people to villages and provide them shelter as our government is committed to ensure housing for every homeless citizen. But they are not interested to return to their villages,” he said.

Officials of different ministries say that the government has been distributing blankets among the cold-hit poor people across the country.

Many poor people, however, complained that the government assistance is too scanty to protect them from the cold.

Rights activists stressed the need for more support from the government as well as the affluent people in reducing the sufferings of the floating people.

Kazi Reazul Hoque, former chairman of National Human Rights Commission, said, “The government must take measures to protect the poor people from extreme cold.  It will be difficult for the poor people to survive unless the wealthier section of society stands by them.”