Domingo wants Shakib to bat at No 4 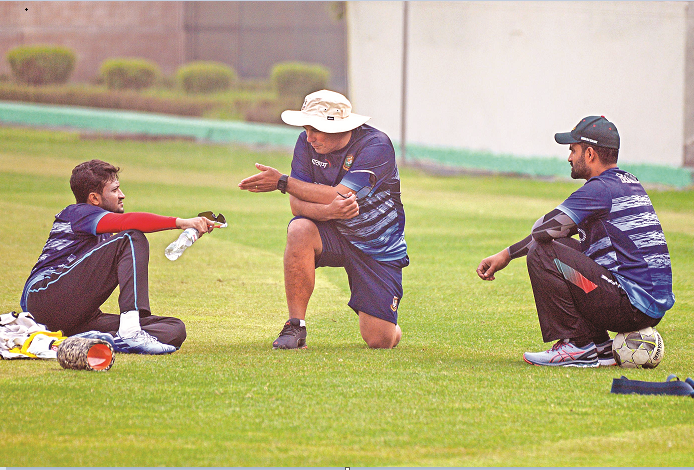 Bangladesh head coach Russell Domingo on Monday said that he wanted to see his experienced campaigners more in the middle-order with the best in the business, Shakib Al Hasan playing at number 4 in the upcoming ODI series against West Indies.

“Obviously Shanto (Najmul Hossain) has been in really good form. It is great to have Shakib back. He had an unbelievable World Cup at number 3,” Domingo told reporters in a Zoom press conference.

“At the moment I am probably thinking of having the experienced players at four, five and six being Shakib, Mushfiq and Riyad (Mahmudullah). It gives us good maturity and experience in the middle-order. We know playing in the sub-continent where the middle-order is so important.”

Shakib, who is set to return to international cricket after serving a one-year ban, has been Bangladesh’s all-time best performer at number 3 position.

He had an exceptional run during 2019 ICC World Cup where he scored 606 runs at an astonishing average of 86.57 in eight matches and he batted at number 3 position in all these matches.

However, since Shakib’s return in the domestic circuit after his ban lifted on October, he failed to replicate the same performance with the bat while youngster Najmul has done well in the recent domestic tournaments, batting in top-order.

Domingo said they are shuffling the batting order only to get a establish batting-unit before the 2023 ICC World Cup in India.

“I have had discussions with players already. They know what their roles are. We haven’t announced the final XI to the players. But they will know today (Monday) what their particular position is going to be before the media knows who will bat where.

“The World Cup seems to be three years away but we know how quickly that goes. This is the first step towards the World Cup. There might be one or two changes in batting positions with some guys will now bat in those positions they haven’t batted before.

The 46-year old South African also wanted to see both his spinners and pacers working hand in hand and produce handy performances in the field.

“It depends very much on the conditions (whether it will be a spin-oriented or pace-oriented attack). We have Shakib in the side who will be bowling ten overs.

“You always want to bowl twenty overs of spin in sub-continent conditions. Maybe with one or two part-timers. But you also need to make sure you have enough pacers in case the wicket offers something to the fast bowlers,” he said.

“Particularly it being the winter, 11:30am start. There might be a bit of movement in the first hour with a little bit of dew and fog around. We need to make sure we cover both bases,” he added.