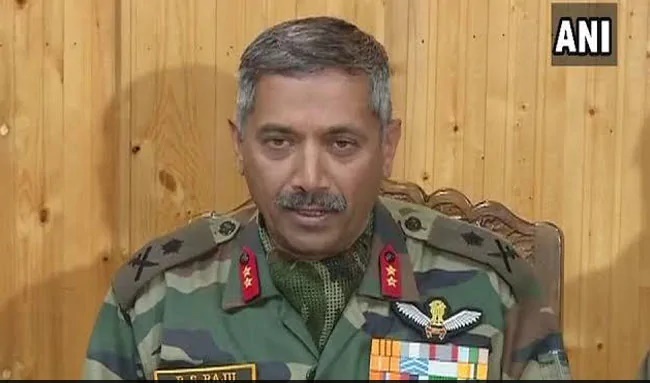 Speaking exclusive to ANI, he added that terrorists from the neighbouring country also continue to target our security forces and civilians in crowded areas, expecting forces to react and cause more civilian casualties.

"Pakistan remains the key instigator to push youth towards terrorism by various means. It has attracted many youths for studies. But along the way, a few have been indoctrinated. Some of them have trained and sent back through the Line of Control (LoC) as part of infiltrating columns as well as through the international border. Terrorists from Pakistan target our security forces and civilians within the Valley in crowded areas. They expect us to react and cause more civilian casualties. They then use this as propaganda to tarnish our image and then go for reacting," he said.

Accusing Pakistan of using social media to spread misinformation and attract new recruits, Raju observed that terrorists encourage overground workers to throw grenades or fire pistol at low-value targets and also initiate them into terrorist ranks but people are aware of Pakistan's design.

"The recruitment by terrorists in 2020 is fairly under control, especially when compared to 2018. The present strength of terrorists in the valley is 217, which is the lowest in last decade. Pakistan's desire to send weapons and drugs by drones/tunnel is definitely a challenge. Pakistan's basic desire is to destabilise Kashmir. As we became strong on the LC and were able to plug the gaps, Pakistan began to adopt alternate means of using drones to drop weapons. To defeat the use of drones, we are using advanced surveillance devices to detect and Jam these aerial platforms," he added further.

"The use of tunnels by terrorists is basically prevalent in the Jammu region. The Army and the BSF have found many. In fact, we discovered one just a few days back. We are using many techniques to detect them, including use of Ground Penetrating Radars. The bottom line is we need to remain alert to plug all loopholes. In fact I would urge the local population must remain alert, especially for transportation drugs as it can weaken the system and corrupt the society," he added.

The Army officer said that the technology and techniques are constantly being upgraded at Chinar Corps to prevent infiltration. "To begin with, we reworked our deployments with some analysis on the tech front. there is huge infusion of equipment for surveillance, for detection and subsequently for neutralisation our ability to detect and neutralise at night has also improved and that's how we have a number of successful contacts at night," he said.

Hitting out at Pakistan for using ceasefire violations to help the terrorists infiltrate in the Valley, he added that during such situations the army in a way a way, that there is a clear disincentive for such behaviour from the other side.

"My main message to youth - is you can get back and we will take care of you. This is a message we have consistently given to all stakeholders, whether it is terrorists, the parents, and the community. We have demonstrated the same on the ground too. In the last 6 months, 17 of those who had strayed have come back and we will take care of them. Presently we are working with the govt for a suitable surrender Policy. My appeal to the youth who have gone astray is to come back. They can get back anytime, including during operations. They can call anybody, their parents, our helpline and we will organise their return," he said.

Raju while speaking about Chinar Corps role to help the locals added, "We are conscious that people are the centre of gravity and within that the youth remain our focus. In fact , our company operating basis enmeshed completely with locals of villages and towns Often the Company Commander is the first responder to any emergency, be it Fire, an accident, or a Drowning case.

"Recently we have started the concept of a - Day with Company Commander. We also conduct large no of events - Sports, Village games, cultural, debates, skill development, painting all these are very well responded by the locals with great enthusiasm," he added.