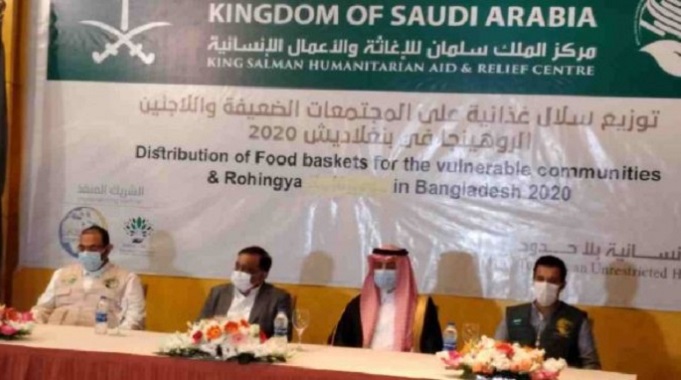 Saudi Ambassador to Bangladesh Issa bin Youssef Al-Duhailan on Sunday said they are considering those Rohingyas as Bangladeshis who have been to Saudi Arabia with Bangladeshi passports.

“They came with Bangladeshi passports to Saudi Arabia,” he told reporters explaining why they are terming them “Bangalee people”.

After attending a food baskets distribution ceremony at a city hotel, the Saudi Ambassador said they have already sent a list of 55,000 people who lost their documents or validity of documents got expired.

He said their documents just need to be renewed or reissued and there is a high-level committee with relevant authorities in Bangladesh to study their issues. “We’re working very hard together.”

Home Minister Asaduzzaman Khan who was present at the same programme said the government will surely provide passports if the Bangladeshis are there in the group who do not have passports.

He said the Rohingyas who went to Saudi Arabia identifying themselves as Bangladeshis with Bangladeshi passports will be considered if they apply for renewing passports.

He said the Rohingya issue is a very old one, around 50 to 60 years’ old issue and the Saudi Arabia was so generous to take Rohingyas in the past. “The Rohingyas live in a particular area of a Saudi city.”

The Home Minister said Bangladesh saw the huge influx in August 2017 and over 1.1 million Rohingyas are now living in Bangladesh.

He thanked the Saudi government for its support towards Rohingya repatriation efforts apart from extending the humanitarian ones for the persecuted people.

The Home Minister said Bangladesh continues its efforts on all fronts for the repatriation of Rohingyas to their place of origin in Rakhine State and hoped that the Saudi government will continue its support.

He said the relationship between Bangladesh and the Saudi Arabia will be strengthened further in the coming days.

The Saudi Ambassador said the proposed visit of Saudi Foreign Minister has been postponed due to his domestic engagement and new circumstances; and the visit will take place soon to discuss bilateral relations.

Meanwhile, Bangladesh, Myanmar and China will hold a tripartite meeting virtually on Tuesday to discuss ways to expedite the Rohingya repatriation process as the international community finds the repatriation of Rohingyas to Myanmar as the only solution to the crisis.

Vice Minister of China Luo Zhaohui will virtually join the meeting from Beijing with Bangladesh and Myanmar delegations, a senior official told UNB on Sunday.

"Myanmar has verified a very few people. They're very slow. They verified only 42 thousand people. There’s a serious lack of seriousness," said the Foreign Minister.

Dr Momen said they are doing their part but Myanmar is not helping the same way.

He said he is always hopeful of beginning repatriation as history says they took back their nationals in 1978 and 1992.

People live in hope and Rohingya refugees also do so and thus they spent another, 2020, that they would have a dignified return to their homeland in Myanmar. But, the hope for a better day did not come.

Bangladesh is trying in multiple ways - bilaterally, multilaterally, tri-laterally and through the judicial system – to find a lasting solution to the Rohingya crisis.