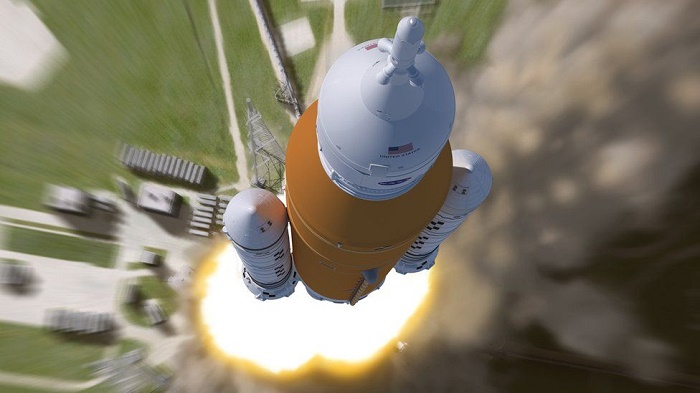 Shortly before 22:30 GMT (17:30 EST), the four engines ignited, burning for more than a minute before the event was aborted.

The core stage of the SLS was being evaluated at Stennis Space Center, near Bay St Louis, Mississippi.

The engines were supposed to fire for eight minutes to simulate the rocket's climb to orbit.

The SLS is part of Nasa's Artemis programme, which aims to put Americans back on the lunar surface in the 2020s.

When it makes its maiden flight - possibly later this year - the SLS will become the most powerful rocket ever to have flown to space.

Teams at Stennis are still poring over the data to find out what happened. John Honeycutt, SLS program manager at Nasa's Marshall Space Flight Center in Alabama, said there were "a lot of dynamics going on" when the engine shut down.

The engines' power levels were being throttled down and up again; they were also being prepared to pivot - or gimbal. This movement allows the rocket to be steered during flight.

"We did see a little bit of a flash come from around the interface between the thermal protection blanket on engine four at the time when we had initiated the gimbal," Honeycutt told reporters at a post-test briefing at Stennis.

The as-yet unknown problem triggered what Nasa calls a failure identification (Fid), followed by a major component failure (MCF). As a result of the fault, an onboard computer known as the engine controller sent a message to another computer called the core stage controller, which took a decision to shut down the vehicle.

"Any parameter that went awry on the engine could have sent that failure ID," said John Honeycutt.

It was the first time all four RS-25 engines had been ignited together, in a test known as a "hotfire".

The core stage of the rocket was anchored to a massive steel structure called the B-2 test stand on the grounds of the Stennis facility.

This was the eighth and final test in the Green Run, a programme of evaluation carried out by engineers from Nasa and Boeing - the rocket's prime contractor.

They wanted to iron out any problems before the core stage is used for the first SLS launch, in which it will send Nasa's next-generation Orion spacecraft on a loop around the Moon.

Nasa's outgoing administrator Jim Bridenstine declined to call Saturday's event a failure: "This is why we test," he said, adding: "Before we put American astronauts on American rockets, that's when we need it to be perfect."

Officials have not yet decided whether to re-run the hotfire, or proceed with shipping the core stage to Kennedy Space Center (KSC) in Florida to prepare it for the rocket's uncrewed maiden flight, a mission called Artemis-1.

"It depends what the anomaly was and how challenging it's going to be to fix it," said Bridenstine.

Asked whether a launch this year was still feasible, he added: "I think it's too early to tell. As we figure out what went wrong, we're going to know what the future holds."

However, if one or more of the engines needs to be replaced, there are spares waiting to be used at Stennis Space Center.

The Artemis-1 mission will evaluate how both the SLS and Orion capsule perform prior to Nasa staging a repeat of this lunar loop with astronauts in 2023.

This will be followed by the first landing on the Moon by humans since the Apollo 17 mission in 1972.

The SLS consists of the 65m (212 ft) -long core stage with two smaller solid rocket boosters (SRBs) attached to the sides. Engineers at KSC have begun stacking the individual SRB segments for Artemis-1.

"This powerful rocket is going to put us in a position to be ready to support the agency and the country in deep space missions to the Moon and beyond," John Honeycutt said during a media briefing on Tuesday.

Officials have been planning to ship the core stage to Florida in February.

Its engines are of the same type that powered the spaceplane-like shuttle orbiter - America's crewed space vehicle for 30 years from 1981-2011.

Nasa is re-using flown hardware: the RS-25 engines used in this test helped launch 21 shuttle missions. Two were used on the last shuttle flight - STS-135 in 2011.

The four RS-25s can generate 1.6 million lbs (7 Meganewtons) of thrust - the force that propels a rocket through the air.

When the solid rocket boosters are added to the core stage, the combined system will produce 8.8 million pounds (39.1 Meganewtons) of thrust. This will make it 15% more powerful than the giant Saturn V rocket that sent astronauts to the Moon in the 1960s and 70s.

Prior to Saturday's test, John Shannon, vice president and SLS program manager at Boeing praised teams at Stennis for keeping the Green Run on track despite the pandemic and this year's particularly active hurricane season.