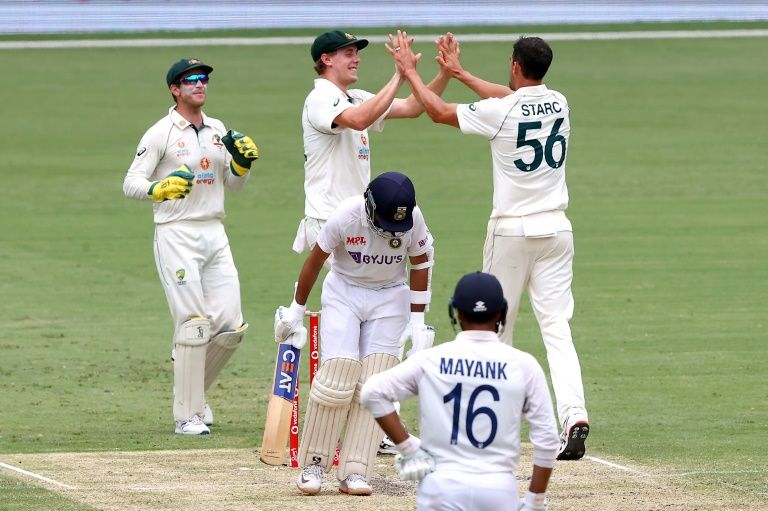 Mitchell Starc claimed the key wicket of Ajinkya Rahane 20 minutes before lunch on the third day as Australia kept up the pressure on India in the fourth Test at the Gabba on Sunday.

India finished the session on 161 for four, with Mayank Agarwal on 38 and Rishabh Pant on four, still 208 runs behind Australia's first innings total of 369.

With India only needing a draw to retain the Border-Gavaskar Trophy, the visitors had looked in control for most of an enthralling opening session on the third day.

But with the lunch break in sight, Rahane could not resist playing at a wide ball from left-arm paceman Starc angling across his body and edged a comfortable catch to Matthew Wade at fourth slip.

The Indian captain, on 37, threw his head back in disgust at the manner of his dismissal before trudging off.

He could have fallen twice in same manner in the opening 30 minutes, but on those occasions the ball flew through a vacant third slip area to the third man boundary.

The Indians, missing handy lower-order batsmen Ravi Jadeja and Ravi Ashwin through injury, have a long tail in this Test, with debutant Washington Sundar coming in next at number seven.

The Australians will feel that one more wicket will expose the lower order and give them a chance to secure a big first-innings lead.

India began the extended morning session on 62 for two, with Cheteshwar Pujara and Rahane at the crease.

Both men looked to keep the scoreboard ticking over, in contrast to Saturday afternoon, where they were more intent on survival.

They saw off Starc and Pat Cummins but Josh Hazlewood was introduced into the attack and produced a brilliant over which led to Pujara's downfall.

Hazlewood had Pujara in trouble when a short ball followed him as he tried to evade it, the ball hitting his glove and falling just short of Cameron Green in the gully.

But two deliveries later Hazlewood got a ball to angle in, then straighten slightly to catch the outside edge of Pujara's bat and Australia's captain and wicketkeeper Tim Paine took a routine catch.