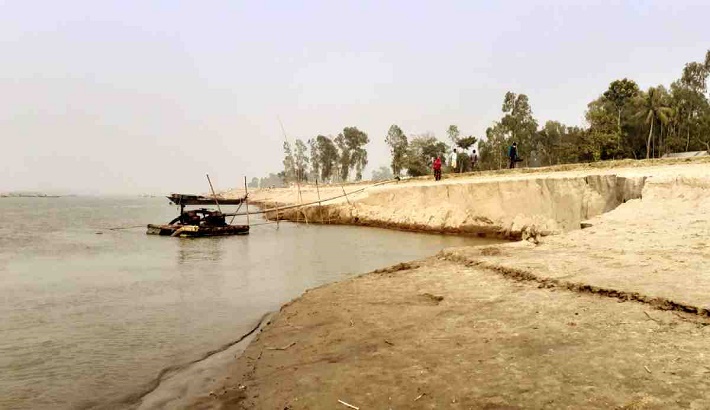 Reckless and illegal sand extraction from the riverbed and banks in villages of Rajibpur Upazila of Kurigram district is causing untimely river erosion and threatening nearby homesteads.

Some influential figures of the area are running a rampant sand mining business right under the noses of the administration, which shows no sign of taking any actions against them, locals complained.

They said that the administration was not playing any role in this regard as some influential people of the area are running the business.

Row upon row of dredging machines are helping the sand miners to illegally lift sand from the banks of Brahmaputra, Jinjiram, and Sonavari rivers in Rajibpur. There is a lucrative market for the extracted sands as the fast-growing economy has a booming construction sector, particularly civic infrastructure. Concrete, paved roads, ceramics, metallurgy, petroleum fracking, even the glass on smartphones, all require sand, and river sand is best.

In Kurigram, the residents of the following villages are most apprehensive of the impact of sand mining on the rivers flowing through the district: Mohanganj, Char Newaji, Kodalkati, Baul Para, Baliamari, Rajibpur, Munsipara are under threat.