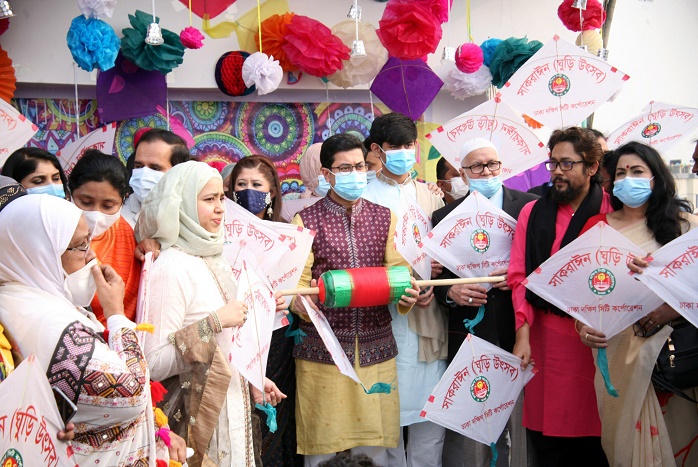 When the kite lovers began flying numerous colourful kites of various sizes from the rooftops of different buildings, it gradually seemed that multi-coloured butterflies laid siege to the sky of Old Dhaka.

Marking the last day of the ninth month of the Bengali calendar, Dhakaities spent time with their friends and family members on roofs till late night.

Wahed Alam, a resident of Lalbagh, said, “We, from the eldest ones to the youngest members of our family, celebrate Shakrain together. This is something very close to our hearts.”

People of all ages joined them from various parts of the capital to experience an event that is unlike any other.

Farhana Chowdhury Swarna, who came to enjoy Shakrain Festival all the way from Uttara, said, “People from different areas of Dhaka come here to enjoy and have a good time. I also come here every year to take part in the most colourful tradition of Old Dhaka. This is really amazing.”

Different traditional foods were prepared and served from time to time during the course of the festival.

Besides, loud music, especially the old and new super-hit numbers, was played from the digital sound boxes and audio mixers of Disk Jockeys set up on roofs.

He made the remarks while talking to reporters joining the festival at Laxmibazar.

Earlier, the main festivity of the day started with the kite flying. On the morning, people of Old Dhaka, especially youths, went to their rooftops to fly kites all day long.

For them, this was not all about flying kites. From each rooftop, competition ensued. In the kite fight, the aim was to slice the other flier’s string with their own, sending the defeated kite teetering to the ground.

When a kite got down from the sky, the winner group ragged their opponents and celebrated it.

This is the reason why the pattern of yarn of the kites is very crucial.

Thursday’s kite flying proved that apart from preparing beautiful kites and making spools for them, the kite lovers have taken special care of the yarn.

Shatab Akbar Dipto, a teenager of Nandakumar Dutta Road, said, “I took long preparations for the day. Using a resin made of barley (glue) and finely crushed glass, I made my kite string strong and sharp. Therefore, I’ve succeeded to cut down around 20 kites today.”

The daylong kite flying came to an end when the kite lovers burnt their kites in the evening.

After the sunsets, the second episode of the festivity kicked off. Paper lanterns and fanush were flown and incredible fireworks began on every rooftop making the people spellbound.

The young daredevils gathered on the roofs to entertain everyone with their risky skills of fireworks. The glittering blaze of flamboyant fire illuminated the night sky providing it a look like a sea of colours.

Shakrain is celebrated on two consecutive days by the people in Old Dhaka depending on their locality.

Residents of Sutrapur, Narinda, Wari, Faridabad, Lalbagh and some other areas celebrated the event on Thursday according to Bangla Academy calendar while the inhabitants of Shakhari Bazar, Tanti Bazar, Goalnagar, Rajar Deuri and Judge Court area will observe the day today following the Panjika date.