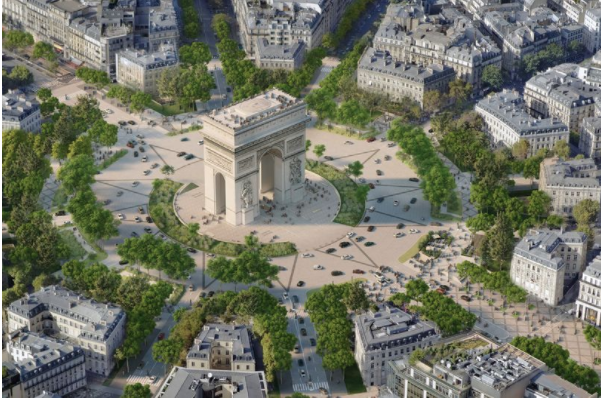 The world-famous Champs-Élysées boulevard in Paris is about to get a huge €250million transformation (approx £223million).

Stretching 1.2 miles between the Place de la Concorde and Arc de Triomphe, the boulevard has long drawn in tourists thanks to the countless shops to be found, as well as the Arc de Triomphe itself.

However, the area is also notorious for the heavy traffic and large crowds, with many Parisians avoiding the area as a result. (A study by the Champs-Élysées committee found that Parisians only made up for 5% of pedestrian visitors in the area).

Now, the boulevard will be turned into a huge park complete with green spaces, children's play areas, museums and plenty of those classic cafés spilling out onto the pavements.

The city's mayor Anne Hidalgo has approved the plans for what she told local media will be an 'extraordinary garden'.

Architecture firm PCA-STREAM is working on the project with the Champs-Élysées committee. Plans include halving the traffic in the area by cutting down traffic lanes and introducing more cycling routes and pedestrian friendly areas.

The avenue has been a part of the French capital for over 350 years since Louis XIV commissioned its creation in the 1600s. In recent years there have been calls from local authorities to give the area an update due to issues including overtourism and pollution.

While currently the Arc de Triomphe is surrounded by a traffic-heavy roundabout, a junction known as The Étoile, the new plans will see this area transformed into a public plaza with reduced traffic, and viewing platforms for tourists who want to snap photos and take in views of the landmark from the ground.

Work is set to begin at the Place de la Concorde with aims for this to be finishing in time for the Paris Olympic Games in 2024.

The rest of the boulevard won't be transformed in time for the games, but the plan is to then work on sections of the avenue at a time, prioritising cycling lanes and pedestrians.