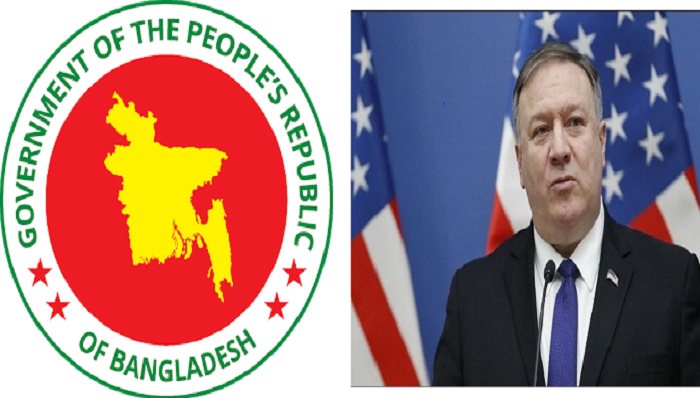 *Dhaka protests the US Secretary of State’s remarks

Dhaka has strongly protested and rejects baseless and false remarks made by US Secretary of State Michael R Pompeo that terrorist group al-Qaida carried out attacks and similar terrorist attacks in future in Bangladesh.

The Ministry of Foreign Affairs (MoFA) in a statement on Wednesday said that attention of the Government of Bangladesh has been drawn to a recent statement made by the US Secretary of State Michael R Pompeo.

In the statement, Pompeo mentioned Bangladesh as a place where the terrorist group al-Qaida carried out attacks, falsely apprehending similar terrorist attacks in future.

“Such irresponsible comment by a senior leader is very unfortunate and unacceptable,” said the MoFA statement.

Bangladesh strongly rejects this kind of baseless remarks and falsification. There is no evidence of any presence of Al-Qaida in Bangladesh, reads the MoFA statement.

Bangladesh, under the bold leadership of Prime Minister Sheikh Hasina, maintains a “Zero Tolerance” policy against all forms of terrorism and violent extremism, and has been undertaking all possible measures and actions to address the menace.

Bangladesh considers that the US Secretary of State’s referring to Bangladesh as a possible location for Al-Qaida operations, is indeed unfounded and offers no evidence.

If any such claim could be substantiated with evidence, the Government of Bangladesh would be happy to take necessary measures against such activities.

However, if such a statement is made out of speculation, Bangladesh considers it very unfortunate, specially in the context of the ever-growing bilateral ties between the two friendly countries based on shared values, peace and common goals, the MoFA statement said.