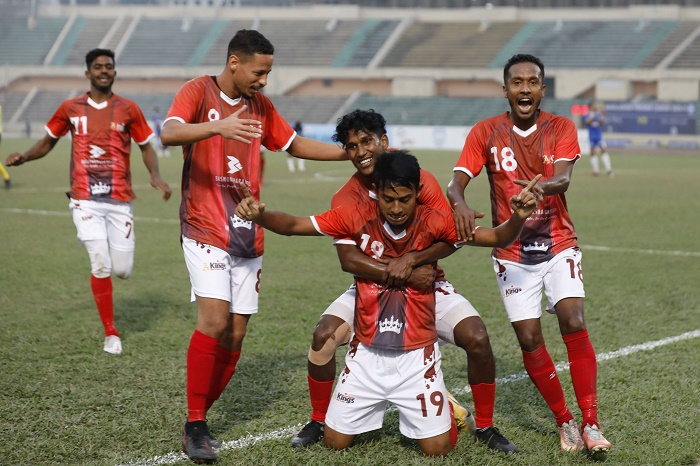 Players of Bashundhara Kings celebrate one of their two goals against Uttar Baridhara Club during their Bangladesh Premier League Football match at the Bangabandhu National Stadium in the capital on Wednesday. (Photo: Reaz Ahmed Sumon)

Defending champions Bashundhara Kings got off to a winning start in the Bangladesh Premier League 2020-21 as they beat Bangladesh Championship League runners-up Uttar Baridhara Club by 2-0 goals in the tournament opener at the Bangabandhu National Stadium on Wednesday.

Argentine-born Chilean forward Raul Oscar Becerra and midfielder Mohammad Ibrahim scored one goal each in each half for the winners.

The reigning champions opened their account in the 35th minute of the game with Argentine forward Raul Becerra netted the ball with a header after Uttar Baridhara Uzbek defender Saiddoston Fozilov failed to clear a cross from Kings defender Bishwanath Ghosh (1-0).

Kings made it 2-0 in the second half with midfielder Ibrahim scoring the goal on his own effort after Raul assisted him from the midfield in the 55th minute (2-0). 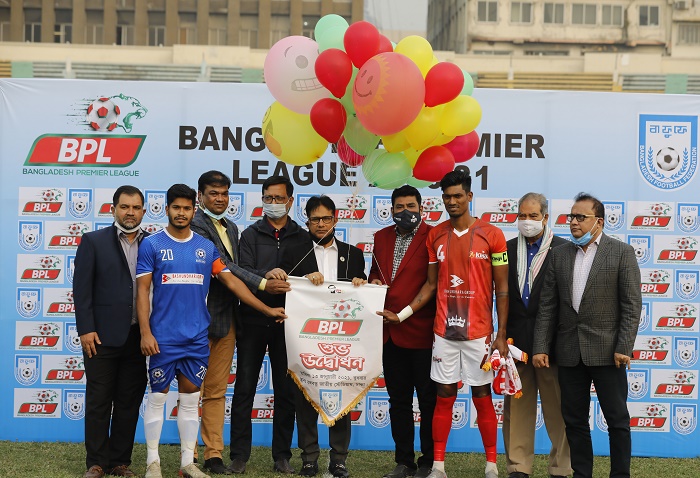 Kings Spanish coach Oscar Bruzon said after the match that their main challenge in the game was to get players completely recovered from previous workloads as they played the Federation Cup final just a few days ago.

“It was a challenge, especially for players to recover physically and mentally after the tough semifinal and final. I feel we have confidence throughout the match. We have difficulties in the first 30 minutes before scoring the goal. But we once scored a goal, the full control of the game was on our side,” said Bruzon.

Abahani got a big blow ahead of their first league match as they will be without 10 players out of their 30-member full squad with five of them tested positive for COVID-19.

Midfielder Sohel Rana and defender Tutul Hossain Badsha will also not be available as they were handed a one-match suspension for unsporting behaviour with the assistant referee during the Federation Cup semifinal.

“It will be a bit hard because we need to make a lot of changes in the team. But we will try to find a solution and win the game. We just want to win the match,” Dhaka Abahani’s Portuguese head coach Mario Lemos said before the match.