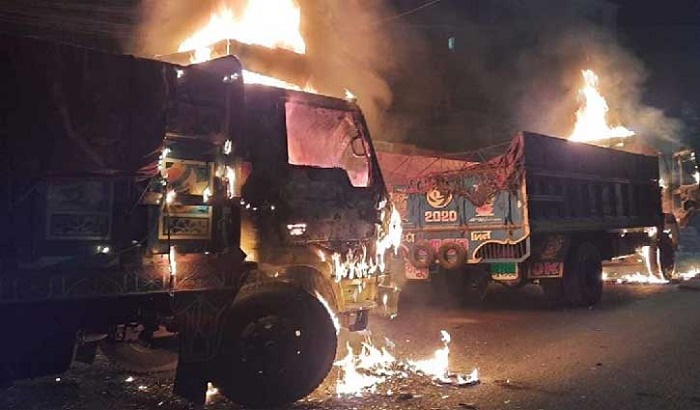 Two youths were killed after a truck hit their motorcycle in Fajilchishta area of Sylhet on Monday night.

The deceased were identified as Lutfur Rahma, 24, hailing from Derai upazila of Sunamganj and Sajib, 20, from Bankala para of the same district.

According to locals, the speedy truck hit the motorcycle while the youths were gossiping beside the road sitting on their vehicle at 10:30 am, leaving them dead on the spot.

After the accident, protesters set seven trucks on fire and vandalized at least 50 freight trucks.

Additional Deputy Commissioner (Media) of Sylhet Metropolitan Police BM Ashraf Ullah Taher confirmed the information to media and said that after receiving the news, the police reached the spot and brought the situation under control. However, the driver and helper of the truck escaped after the accident immediately.

He said the bodies were sent to Sylhet Osmani Medical College Hospital for autopsies.