‘The Yo-Yo test is better than Beep test’ 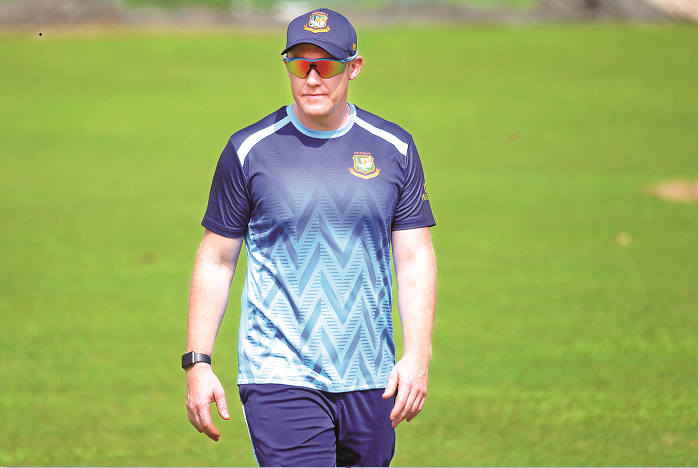 Bangladesh have started their preparation camp on Sunday for their upcoming home series against West Indies, scheduled to start on January 20. This will be Bangladesh’s first international assignment in the last 10 months as they didn’t get a chance to compete in any international match since March last year after the coronavirus situation came out in the country. Nick Lee, Head of Physical Performance of Bangladesh national team who was appointed in March last year on a three-year contract till 2023, has introduced the Yo-Yo test trend in Bangladesh cricket recently and it will be applied first in Tigers’ home series against West Indies. The 37-year old Englishman has talked to The Daily Sun on his view of bringing the Yo-Yo test culture in Bangladesh and other issues like his observations on the players’ fitness, comparison between Asian and Western players’ fitness, etc during a recent interview.

The Daily Sun: You have seen the Bangladesh team staying in the bio-bubble. How is the experience going on?

Nick Lee: So far, I am impressed. They have an excellent physical foundation, the right attitude towards the training. It is good to know them personally in the bio-bubble.

The Daily Sun: You got the job at a very challenging COVID-19 time and you also didn’t know the Bangladeshi team's fitness culture. How do you cope up with them?

Nick Lee: I think the coronavirus situation is challenging for everybody around the world. So it is something one needs to adapt as one cannot plan for it. I have engaged with the players through zoom and WhatsApp and sent them many videos that they can perform by staying at home. Even various kinds of equipment were also sent to the country's players so that they can maintain their fitness level. It was a problem initially but it also provided the players a good opportunity to focus on fitness without any distraction. Recently the players are playing a lot of cricket. They don't get time to concentrate on fitness unless they get injured. So productivity has come by working on fitness professionally in this gap time.

The Daily Sun: How are the players responding to your fitness culture?

Nick Lee: Every trainer has his style when he works with a team and does things differently. I am impressed with the players' fitness level, and credit must go to Mario and the psychotherapists. The players are proactive. They enjoy the challenge and they are engaged in everything that I have asked them. So I cannot ask more. In my opinion and after working with the players of other countries I can say that the players are at a reasonable level, they have the right attitude and approach to their task professionally and I am very excited to work with this group.

The Daily Sun: The pace bowlers are prone to injuries more. Do you think that the lack of strength is the reason behind it?

Nick Lee: Often you can see that the pace bowlers worldwide are getting injured and stay out of the game for a long time. It cannot be answered directly because sometimes it has to do with how many overs they bowl, sometimes with the poor condition, and sometimes with the match load.  There are numerous things we have to do with pace-bowlers and try to keep them available for as many games possible in a year. My job as a trainer is to give selectors and coaches as many players as possible who will be available for many days in a year and ensure the physical condition doesn't undermine when the players are performing in the field.

In the sub-continent, pace bowlers ball less but when they go to Australia, New Zealand, England, South Africa - the seam bowlers have to bowl more overs. We have to make sure that they are capable and physically comfortable with achieving the outcome when they go abroad. Now there is a difference between physical and cricket conditioning. Players can work as hard as they like to develop themselves physically but to get bowling fitness, they need to practice bowling. As there was a long layoff from international cricket, so I guess it is the right time to establish cricket fitness at the international level.

I am already impressed with their physical status. The only thing I have to do now is to see whether they are fit for playing good cricket and ready to compete in international matches. The only way it can be done is by playing practice matches and domestic tournaments.

The Daily Sun: If you have to compare the fitness of Bangladeshi players with the players of other countries, where will you keep them?

Nick Lee: It is difficult to compare the sub-continental players with the Western players as the genetics and development paths are entirely different. If I see from a sub-continental point of view, then the Bangladeshi players are at an acceptable level and the credit must go to the previous trainers who were here for the last ten years.

The Daily Sun: How do you see the response of players in the Yo-Yo test?

Nick Lee: There are several reasons why I have decided to adjust the way we were testing fitness. One is that the other 10 national teams use the Yo-Yo test as their benchmark. So it will be easier for me and any other trainer who comes to the system to compare ourselves with other countries. As far as my knowledge currently there is only one nation in the top 10 that uses something other than the Yo-Yo test. Now we have some data about the Yo-Yo test and we can give accurate feedback to the selectors in comparison with maybe England, Pakistani players, etc and that was one reason.

The second reason from the scientific point of view I believe the Yo-Yo test is better in measuring all-around athletic capabilities and the beep test just focuses on aerobic conditioning. The Yo-Yo test is slightly faster and it's intermittent and so it’s more like sports and because it runs faster. It’s a slightly better test of your agility as well.

The Daily Sun: Will you conduct the Yo-Yo test in the future as well?

Nick Lee: At the moment I am trying it with the national players. I never say never to anything and if it doesn’t work we go back and try other methods. At the moment I want to use this method as a gaze of placing ourselves where we are in the world compared to other countries. You might not reach the same level as other people but you can improve yourselves. In terms of national players how they approached the Yo-Yo test I cannot find their faults because everyone tried and was engaged and kept trying in getting better scores. Some of the scores the white-ball players achieved were world-class scores in comparison with English players or other players of different countries.