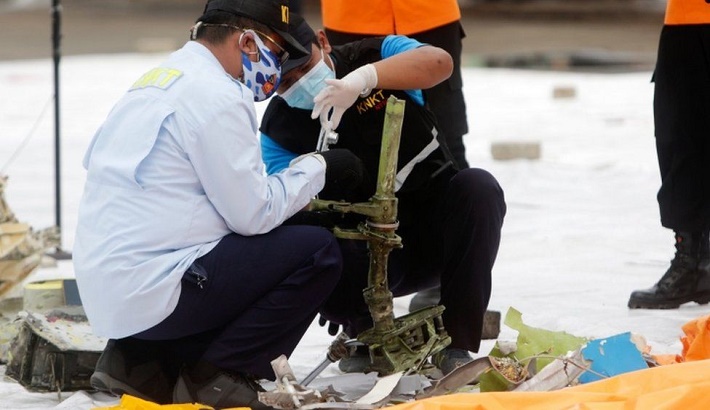 Parts of the fuselage of the plane have apparently been recovered

"Black boxes" from a passenger plane that crashed into the Java sea soon after take-off in Indonesia on Saturday have been located, officials say.

Navy divers are confident that they will be able retrieve the two flight recorders when the search operation resumes on Monday.

Aircraft parts and human remains have been found.

The Sriwijaya Air Boeing 737 was carrying 62 people when it vanished from radar on its journey to Borneo.

"We have located the position of the black boxes, both of them," said Soerjanto Tjahjono, head of Indonesia's transport safety committee, quoted by AFP earlier on Sunday.

"Divers will start looking for them now and hopefully it won't be long before we get them."

The flight data recorder and cockpit voice recorder, or black boxes as they are often called, store data about planes. They can provide vital information in air accident investigations.

Investigators are analysing items which they believe to be a wheel and part of the plane's fuselage. A turbine from one of its engines is also among the debris that has been recovered.

The search operation has been suspended for the night but is due to resume on Monday morning.

However, there appears to be no hope of finding any survivors.

There were thought to be 50 passengers - including seven children and three babies - and 12 crew on board, though the plane has a capacity of 130. Everyone on board was Indonesian, officials say.

Sriwijaya Air, founded in 2003, is a local budget airline which flies to Indonesian and other South-East Asian destinations.