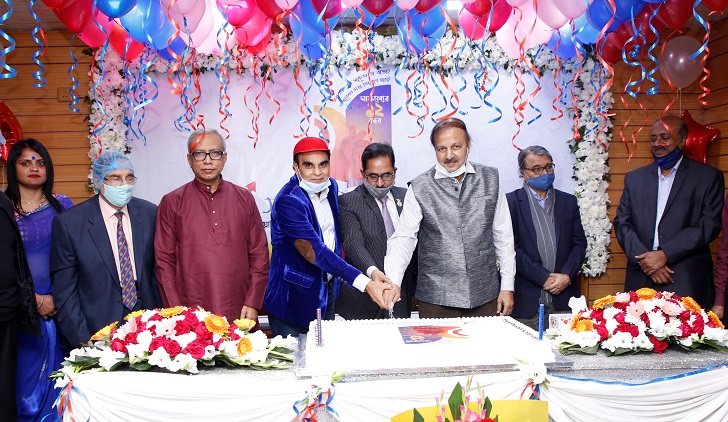 Saaol Heart Center Bangladesh is the pioneer of Saaol method heart treatment in Bangladesh. It is not just a medical facility, but a social movement, remarked Mr. Abdul Mannan, Secretary – Ministry of Health and Family Welfare.

He said, “Popularization of the Saaol method will reduce the budget of the health sector.”

Health Secretary made his remarks while speaking as the chief guest on the 12th foundation anniversary of Saaol Heart Center (BD) limited on Saturday morning, at Saaol auditorium in Eskaton Garden road.

Mr. Abdul Mannan added, “Mohon Raihan was a rebel on the streets. He is bringing the same revolution in the health sector. Saaol method is a revolution.” He also informed his plans to discuss with the higher authorities after Covid-19 pandemic on the possible involvement of Saaol Heart Center with the public health services. Health Secretary Mr. Abdul Mannan informed that the government is ready to provide all kinds of support to Saaol Heart Center.

Poet Mohon Raihan, founder and chairman of Saaol Heart Center, addressed that remembering the glorious past of our great liberation war in 1971, Saaol Heart Center has been established in Bangladesh as a health movement to keep the citizens of Bangladesh free from the risk of heart disease. Saaol is a social movement to make the heart treatment easily accessible and available to the marginalized people across the country.

He added, “Today our dream is to build the first ever non-surgical heart treatment and lifestyle hospital and medical university in Bangladesh.” To make that dream come true, he invites people from all class and occupation to come forward.

Mohon Raihan said, ‘’there was a time even my close friends found it difficult to believe that it is possible to cure heart blockage without operation instead of the 60-year old bypass surgery method. It was not very easy to make it sound believable. However, we have been successful in the past 12 years to prove it and make it believable.”

Dr. Salimullah Khan said that modern science has created many diseases while trying to find cure for diseases. Saaol has discovered a new medical system by identifying that problem in science. Naimul Islam Khan said that Mohan Raihan's sole initiative needs to be supported by the government.