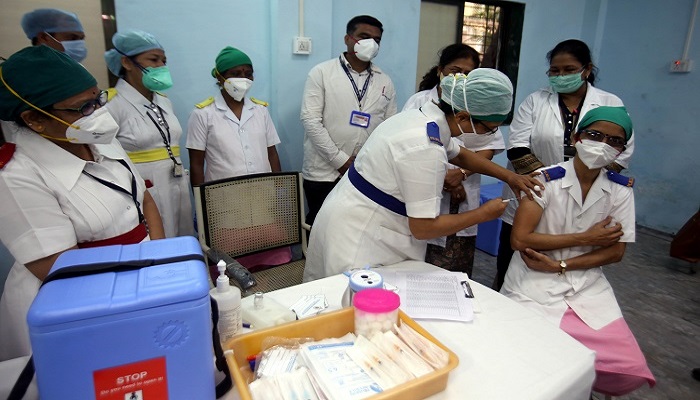 India is set to begin Covid-19 vaccination drive across the country on January 16 in a bid to prevent the people from being infected with the deadly virus.

The government came up with an announcement Saturday evening, after Prime Minister Narendra Modi had chaired a high-level meeting to review the pandemic situation in the country.

Priority will be given to the healthcare workers and the frontline workers, estimated to be around 3 crore in number, the government said, adding that they would be followed by 27 crore people, including ones above 50 years of age and under 50 with co-morbidities.

The government had earlier approved two vaccines for emergency use in the country - Bharat Biotech's Covaxin and Covishield- developed by AstraZeneca and Oxford University and being manufactured by Pune-based Serum Institute of India.

PM Narendra Modi took a detailed and comprehensive review of status of Covid management covering various issues .Emergency use authorisation has been granted by the National regulator for two vaccines  (Covaxin and Covishield) which have estabilished safety and immunogenicity as said by the Indian government in a press release.

It claims that no compromise on scientific and regulatory norms will be allowed. The rollout of Covid -19 vaccine will provide priority to the healthcare workers and frontline workers who are estimated to be around 3 crores followed by two age groups.

For country wide rollout, the  government has created a unique digital platform to provide real-time information of vaccine stocks, their storage temperature and individualised tracking of beneficiaries of the Covid-`19 vaccine.

This platform will assist the programme manager of all levels through automated session allocation for pre-registered beneficiaries, their verification and for generating a digital certificate upon successful completion of the vaccine schedule. More than 79 lacks of beneficiaries have already been registered on the platform.

India has already arranged a training process which was detailed out 2,360 participants during national level of training which comprises of state immunisation officers, cold chain officers. More than 61,000 programme managers,2 lacks vaccinators and 3.7 lack other vaccination team members have been trained so far as part of state, districts and block levels. India already organised three phases of dry runs having been conducted across the country.

The third dry run was conducted Friday across 615 districts covering 4,895 session sites in 33 states and union territories. After detailed review, it was decided to roll out vaccine for the entire country from January 16.