Bangladesh may emerge as the biggest industrial production hub in the Asia: Doraiswami 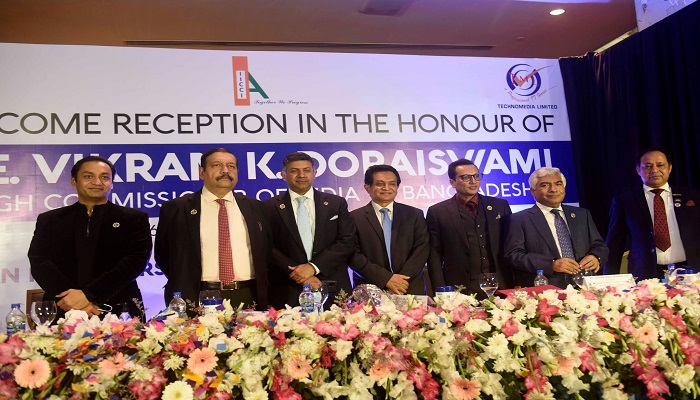 Bangladesh may emerge as the biggest industrial production hub in the Asia, said Indian High Commissioner in Dhaka Vikram Doraiswami.

He made the statement at a function organised by Indian Importers Chambers of Commerce and Industries at the hotel Westin Dhaka.  Held on Wednesday, the programme aimed at according a reception to the high commissioner.

Many largest companies of India are keen to invest in Bangladesh due to low production cost, said Doraiswami.

The Indian companies are also interested to invest here and take the products to India for marketing. “This will facilitate economic development and reduce the cost of various commodities in Bangladesh which ultimately to be beneficial for both the countries,” he added.

Having produced in Bangladesh at low cost, electronics items, safe drinking water and many other commodities can be taken to India, he said adding that both countries will benefit from such ventures.

The Indian envoy laid emphasis on further expansion of connectivity between the two countries as well as increase in  rail-road-water and airways between India and Bangladesh.

A book written by Dr Joshoda Jibon Deb Nath was also launched at the function.