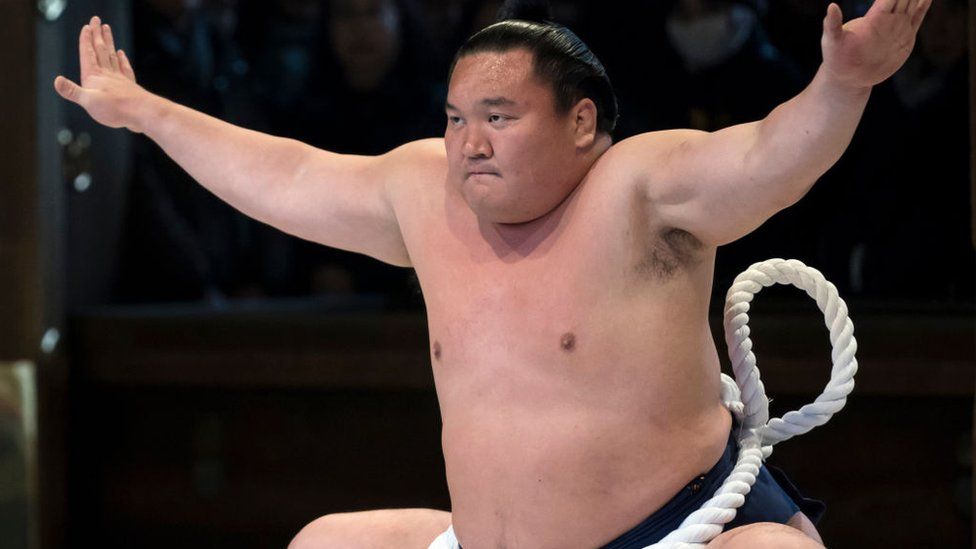 The Mongolian-born grand champion took a Covid-19 test after losing his sense of smell, the Japan Sumo Association (JSA) said.

The news comes as Japan considers declaring a state of emergency in and around Tokyo, where virus cases have surged.

It has imposed relatively relaxed restrictions so far, with a more contained outbreak than some countries.

Activities like sumo wrestling have continued despite the pandemic, but cases have emerged in the sport too. In May, a 28-year-old Japanese sumo wrestler died from organ failure caused by the virus.

Hakuho - the longest-serving yokozuna or top-ranked wrestler in Japan - had been preparing for the New Year Grand Sumo Tournament, due to start in Tokyo on Sunday.

He will now seek the advice of specialists while the other wrestlers in his stable will also be tested, JSA said.
Also on Tuesday, Japan's Prime Minister Yoshihide Suga said that a state of emergency declaration for Tokyo and the surrounding area would be decided on Thursday, according to local media reports.

Japan has recorded nearly 249,000 coronavirus cases and more than 3,500 deaths since the start of the pandemic. While the figures are vastly lower than countries like the UK and US, the Japanese government has been concerned by what it has described as a "very severe" third wave of infections.

The spike in cases has cast fresh doubt over whether Japan can still host the delayed 2020 Tokyo Olympics and Paralympics this summer.

Last week, Mr Suga said the games would go ahead and be "safe and secure".

Japan first imposed a state of emergency last year in spring. There were no penalties for non-compliance and the country has avoided the stringent lockdowns seen in other parts of the world.

Activities like sumo wrestling have continued despite the pandemic and Hakuho, 35, was seen competing at events last year.

In April Shobushi, whose real name is Kiyotaka Suetake, became the first sumo wrestler to test positive for the virus. His condition quickly worsened and he died due to multiple organ failure.