Kartik Aaryan And Janhvi Kapoor spotted together In Goa 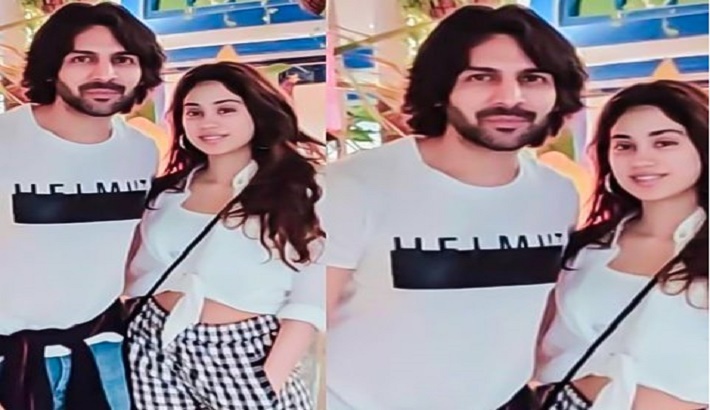 Kartik Aaryan and Janhvi Kapoor are holidaying together in Goa and one of their candid clicks has gone viral.

The Gen-Next actors and enjoy a lot of popularity on social media. Their fans keep sharing their unseen and candid pictures on their Instagram accounts and the latest one is surely going to leave everyone excited.

Both Aaryan and Kapoor could be seen dressed casually. While Aaryan could be seen wearing a white T-shirt and blue jeans, Kapoor opted for a check-jump suit and a white top. Have a look at the post right here:

On the work front, Kartik Aaryan is gearing up for Ram Madhvani's Dhamaka, Anees Bazmee's Bhool Bhulaiyaa 2, Karan Johar's Dostana 2, and is also in talks with Rohit Dhawan for the remake of Allu Arjun's Ala Vaikunthapurramuloo, however, no announcement has been made on the film yet. He also has an action-saga with Om Raut that will be made in 3D apparently.

Coming to Janhvi Kapoor, she has Karan Johar's Takht that also stars Anil Kapoor, Kareena Kapoor Khan, Ranveer Singh, Alia Bhatt, Vicky Kaushal, and Bhumi Pednekar. The drama is slated to release on December 24, 2021. She also has Dostana 2 with Aaryan himself that also stars newcomer Lakshya. The actress was last seen in Gunjan Saxena: The Kargil Girl and Aaryan with Sara Ali Khan in Imtiaz Ali's Love Aaj Kal.