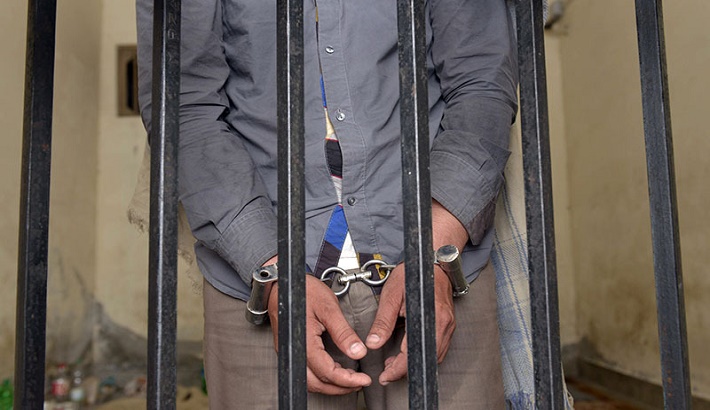 The police department has terminated the services of its four officials, including two station house officers, on the recommendation of a judicial commission’s probe into the stripping and torture of an Afghan national in custody.

A video showing the stripping of Radiullah alias Amir Tehkalay on the Tehkal police station premises in Peshawar had caused a social media uproar in June this year.

The provincial government had formed a one-member judicial commission to investigate the incident.

Peshawar High Court Justice Lal Jan Khattak, who was appointed to the probe body by the chief justice after the government requested him for the appointment, completed its report in Sept.

On Monday, Peshawar SSP (operations) Mansoor Aman issued a notification declaring that the police officers, who were nominated in FIR No 710 on June 24, 2020 at the Tehkal police station have been dismissed from service after proper departmental proceedings under the KP Police (Efficiency and Disciplinary) Rules, 1975.

They were charged under sections 355, 342, 116, 118, 119 and 337-A(i)F(i) of the Pakistan Penal Code and sections 20 and 21 of the Prevention Electronic Crimes Act, 2016, with using criminal force to dishonour the victim, his wrongful confinement, and concealing design to commit the offence.

Radiullah was taken into custody on the charge of possessing drugs after a video went viral on social media showing him curse officials of the city police under the influence of an intoxicant.

A couple of days later, another video was shared on social media in which Radiullah was seen apologise for his remarks against the police.

There followed another video, which showed the police officers strip him inside a police station.

The stripping caused widespread outrage, including protests, in parts of the province forcing the provincial government to form a one-member judicial commission to investigate the incident and fix responsibility.

In its probe report available with Dawn, the commission noted that the main role in the incident had been played by inspector Imranuddin and inspector Shahriyar Khan, who were then heading Tehkal and Yakatoot police stations, respectively.

It added that both police officials had been charged by the torture victim with his ordeal.

“The victim told the commission that not only he was beaten up by both officials after his arrest but he was also stripped right on the spot and was taken in naked condition to the police station Tehkal.”

The commission said that the torture victim told it that he was subjected to torture at the police station, while his videos were also made.

It added that the medical examination of the victim confirmed multiple signs of torture and bruises on his body.

Justice Khattak noted that the inquiry commission was of the view that both police officers were responsible for the torture, stripping and filming of the accused.

The commission also established the role of police constables Tauseef Alam and Naeem Khan in the torture and stripping of the accused. It, however, exonerated another policeman, Zahirullah, in the case.

The commission said the records showed that neither the police high-ups nor the relevant SHOs ever tried to handle the issue, which was a result of the first video of Radiullah, in accordance with the law.

“So much so, that no report was ever lodged by any of the police personnel under the PECA Act 2016 regarding the victim nonsense in the first video,” it said, adding that the omission and inaction could be termed as the worst kind of delinquency on part of the police.

“Had action, under the law prescribed for, been taken by the police under the law against the wrongdoers of Video 1, [the] situation could have different from the one emerged and faced by the government in the aftermath of the incident,” it said.

The commission said it could safely be held that the inaction and failure on part of the police to go by the book against the police’s vilifiers was the root cause of the incident.