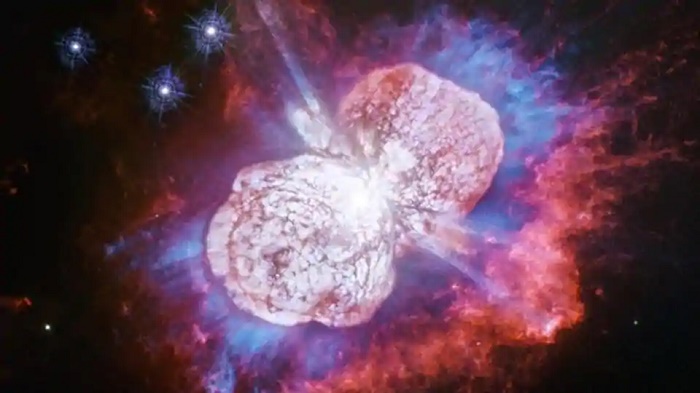 You may have had the chance to see various types of fireworks throughout your life. But, have you seen a ‘firework show’ in space? Well, if so, then lucky you. But if no, then worry not as today is your lucky day. NASA shared an image of a doomed super-massive star 7,500 light-years away named Eta Carinae or as the caption reads ‘slow-motion firework show that lasted… well over 150 years’. If reading that has got you excited, wait until you see the picture. This is one informative and intriguing post that is bound to leave you amazed.

The official Instagram account of NASA shared this photograph on January 2. The text shared alongside the post describes what it depicts. “Goodbye, 2020. Hello, 2021 Have you ever seen a slow-motion firework show that lasted… well over 150 YEARS? Meet Eta Carinae,” it reads.

The caption further goes onto state, “Eta Carinae, shown here in a @NASAHubble image is a doomed super-massive star 7,500 light-years away that went through a ‘Great Eruption’ in the 1840s that made it the second-brightest visible star in the sky for over a decade — it was so bright that sailors at the time used it as an important navigational star in the southern seas”.

Since being shared on the photo and video sharing platform, this snapshot has captured netizens’ attention. It currently has over 9.4 lakh likes. The post has also amassed many comments.