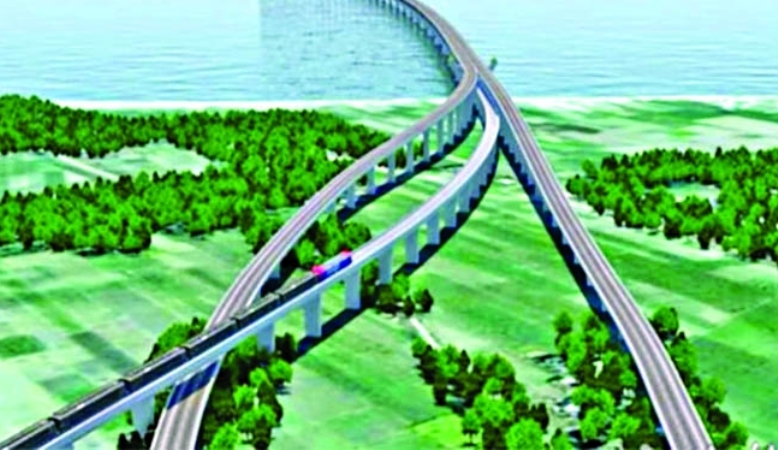 The railway ministry and bridges division has finally agreed on a solution to the vehicular movement clearance problem at both entry points of the under-construction Padma Bridge, created by the rail link project, official sources said.

The problem was created by the rail line being laid by the ministry of railways at the lower deck of the double-deck bridge.

As a solution to the problem, the bridge’s railway connection has been redesigned which will only require extra piling not the demolition of any piers, sources added.

A tussle ensued between the two public entities after the 6.15km mega bridge’s entry points’ headroom clearance for vehicles was found less than standard 15 metres horizontal and 5.7 metres vertical clearance.

Bridges division refused to accept less than standard headroom clearance with an argument that it will bar large vehicles like loaded trucks, covered vans and double-decker buses from entering the bridge.

In a meeting last week, both the entities agreed after six months on a new design for some railway piers of the bridge after Prime Minister Sheikh Hasina’s intervention to resolve the issue.

“The rail link project has been re-designed. But for this, no piles or piers will need to be demolished. The problem at Jajira point is being resolved through raising the number of piling to expand the width and height,” commented Padma bridge rail link project director Golam Fakhruddin Chowdhury.

Now, there is no barrier to work of the rail project as bridges division has agreed on the new design through a December 31 formal letter, he informed.

Resolving the problem at Mawa point is at the final stage and it will be settled in a week, he added.

Bridge division high officials said they were satisfied with the new design as it will ensure a standard 15 metres and 5.7 metres headroom clearance of the bridge.

The main bridge construction work has so far seen 91.50 per cent progress after installation of all the 41 spans was complete on December 10. Overall the project saw 83 per cent progress.  Now, work is going on to install roadway and railway slabs on both the decks of the steel truss megastructure. Out of 2,917 roadway slabs, 1,455 have been installed, while 2,074 out of 2,959 railway slabs have so far been installed.

The Padma Bridge is expected to be open to traffic by March 2022 as the project work lost pace after the coronavirus pandemic as many holidaymaking Chinese project experts and workers got stuck in China after the first virus outbreak there, according to project high officials.