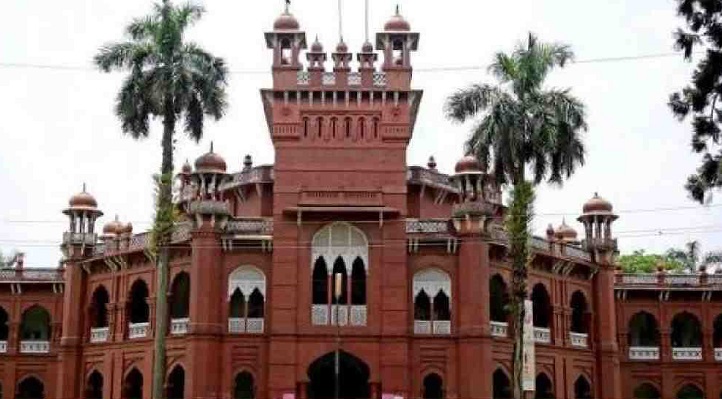 As we turn the calendar to usher in 2021, teachers and students of Dhaka University share their hopes and demands for the new year with UNB.

In 2021, Dhaka University is going to celebrate its Centenary. Students and teachers of the University emphasized on more Research and creating new knowledge, holding the DUCSU election and lessening academic losses due to the Covid-19 pandemic.

Former Vice-Chancellor Prof AAMS Arefin Siddique told UNB, “I hope the university will run smoothly with a teacher-student friendly Environment. Dhaka University has a glorious past and it has been serving the nation but Covid-19 pandemic changed the situation.”

“The pandemic teaches us many things. In post-pandemic times, I hope teachers, students will work together for the welfare of the nation with their intellect and love. And University should emphasize on creating new knowledge and research,” he added.

Echoing with Prof AAMS Arefin Siddique, Dhaka University Professor Emeritus Serajul Islam Choudhury said “Research is a must. Moreover, we need to focus on publication and translation of world-class literature in Bengali. This is important for creating new knowledge.”

Mentioning inadequate number of dormitories the professor said “Accommodation is the main problem. Authorities should ensure it first. Hall renovation is also needed. A number of buildings at the university are vulnerable and students live here amidst danger.”

Prof Serajul Islam Choudhury also said DUCSU election should be a routine election. “Co-curricular activities are important to flourish a student’s intellect. DUCSU can play pioneer rule here. A University’s environment will not be healthy without a student’s representative body like DUCSU.”

Prof Imtiaz Ahmed, Professor of International Relations of DU said, Dhaka University going to step into hundred years. "Marking the centenary, we scheduled to organize some international conferences with noted academicians across the world. So I hope it will impact positively. In one sense, Dhaka University formed Bangladesh. But we lag behind in doing research and creating knowledge.”

The professor blamed teachers’ politics for lagging behind in research. Saying teachers are more attentive in politics not in research. “Party politics should be banned for teachers.”

Asked about DUCSU election, the professor said polling center in DUCSU elation should be set outside of the halls for free and fair election. "Meritorious students should led DUCSU not politicians,” he said.

Former Dhaka University Central Students Union (DUCSU) Vice-president Nurul Haque Nur too mentioned accommodation problem is the main problem saying, “Most of the University students come from middle and lower income family so it’s hard for them to manage accommodation outside of the dormitories.”

“On the occasion of DU centenary, the University authority has taken a master plan for its infrastructural development including creating new dormitories. I hope the authority will implement it immediately," he added.

He however urged students to be aware about their rights and to protest to attain them.

Mentioning academic losses due to the pandemic, Saddam Hussain said, “The university authority has to take steps to avoid session jam and to minimize student’s academic losses.”

Saddam also said, “DUCSU election should be held in 2021, the year of hundred years of the University also continuing centenary of Father of the Nation Bangabandhu Sheikh Mujibur Rahman.”

“Evening courses should be stopped and the university authority has to implement their plan to suspend evening courses” Saddam said. ‘The University should not be like a corporate institution."

Rakib Hasan, Convener of Dhaka University Chhatra Dal told UNB, “I hope DU authority will take necessary steps to minimize our academic losses due to pandemic. Special care will be expected from teachers to lessen 1 year lost from our lives.”

Mentioning student politics in the campus, JCD leader hoped that New Year will be year of political co existence on the campus. “Every political party should be able to exercise their political rights in a fearless environment.”

He however stressed the need of increasing quality research to make the University world-class. Teachers should pay more attention in doing research not in politics, he said.

Mohiuddin Mahi, a third year student of Mass Communication and Journalism of the University said, "Accommodation problem is main problem for students. In the New Year it is expected that crisis in the dorms will be solved. Moreover, the University should create various opportunities for students to flourish their intellect."

A world-class, spacious library should immediately be built as students face a severe crisis in the central library, Mahi said.

Dhaka University Vice-Chancellor Prof Akhtaruzzaman said, “Overcoming the obstacles of 2020, New Year will be a year of possibility,”

Expressing firm determination to take the university forward on the path of new possibilities in the New Year, the VC said various programs have been taken at the University on the occasion of Mujib Year, University Centenary and Golden Jubilee of Independence.