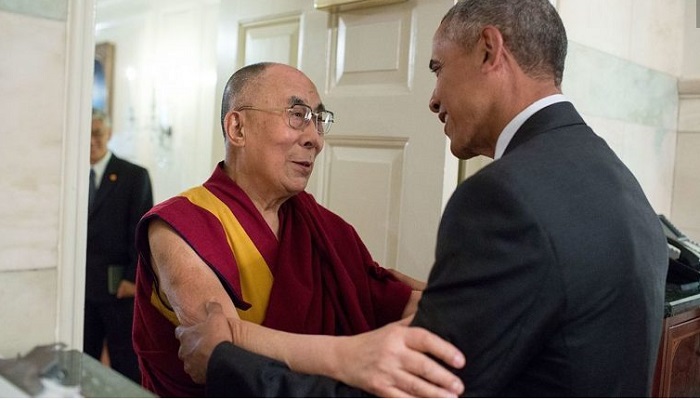 The Dalai Lama is the highest and holiest spiritual leader of Tibet, and presents a unique challenge to China in being a charismatic leader who is respected globally.

Despite being in exile for so long, he has remained the most revered spiritual Buddhist spiritual head in Tibet. He is also a Noble Laureate.

According to Tibetan Buddhism, the Dalai Lama has reached the ultimate goal of breaking the cycle of birth and death but instead he has chosen to continue being a reincarnate in order to help others reach their spiritual enlightenment.

The current Dalai Lama is the 14th body in that six-century long tradition. However monks are celibate, and succession cannot be hereditary.

When a Dalai Lama passes away, the search must therefore be conducted to “discover” the newly reincarnated body. This process can take years and involves the reading of arcane spiritual signs.

After a few days, his head had shifted to east while fungus appeared on the north eastern side of his shrine.

High lamas interpreted this as a sign that the next body would be found in northeastern Tibet, where they searched villages for newly born children.

Next a series of tests are conducted to confirm the child.

The 14th Dalai Lama was presented with items for identification, some of which were owned by his predecessors.

After allegedly being able to correctly identify all of them, and receiving confirmation from scholars he began re-learning the knowledge from his previous lives in preparation for leadership.

Such a process leaves plenty of opportunity for China to take advantage.

In 2007, China passed legislation not only to control and undermine the Tibetan religious activities but ultimately to meddle in the selection of reincarnate lamas. Most absurd of all, individuals are required to submit an “application for reincarnation” to the government for approval.

And this is obviously aimed at controlling the reincarnation of His Holiness the 14th Dalai Lama, because China knows that if the Dalai Lama is under their control, the whole of Tibet would effectively be under their command.

China then intends to select their own reincarnation of His Holiness the Dalai Lama which is and will be a fundamental attack on the Tibetan people’s religious freedom.

The new regulation basically excludes “any foreign organization or individual” from the reincarnation selection process, obviously in an attempt to legitimize China’s authority and exclude the Tibetan Diaspora (and others) in the selection of the next Dalai Lama.

The Chinese have consistently maintained that any reincarnation must be determined on the basis of the late 18th century procedure instituted by the Manchu Qing rulers of China.

Under this “golden urn system” of selecting reincarnations, the names of prospective candidates would be placed in an urn, from which lots would be drawn to pick the real incarnation.

Therefore, any other method being suggested by the Dalai Lama is seen as contrary to established rules and illegitimate, as it denies the Chinese government’s involvement in the process.

In 2011, new ordinances were passed which stationed party (Chinese Communist Party) officials at monasteries for direct supervision of monks and nuns.

In response to Chinese laws, His Holiness issued an edict exploring the possibility of selecting a child before his death, or a spiritual transfer to a fully grown adult. He later added that his successor may be born outside Tibet, perhaps as a woman, and that it may even be time for the tradition of the Dalai Lama to end.

Clearly he intends to leave all possibilities on the table.

His Holiness has further given a concrete explanation on how the reincarnation is a phenomenon which should take place either through the voluntary choice of the concerned person or at least on the strength of his or her karma, merit and prayers.

Therefore, the person who reincarnates has sole legitimate authority over where and how he or she takes rebirth and how that reincarnation is to be recognized.

It is a reality that no one else can force upon the person concerned, or manipulate him or her.

This means the future reincarnation of the Dalai Lama rests entirely in his own hands.

The Dalai Lama has also stated that at the time of his death, he will leave behind a will and certainly he will be born again somewhere within the Buddhist community.

So, it is particularly inappropriate for Chinese communists, who explicitly reject even the idea of past and future lives, let alone the concept of reincarnate Tulkus, to meddle in the system of reincarnation.

His Holiness also stated that apart from considering the legitimate methods by senior lamas and following the old traditions of selecting a Dalai Lama, no recognition and acceptance should be given to any candidate chosen for political ends by anyone, including those in the People’s Republic of China.

Such brazen meddling by Chinese authorities in the religious affairs of the Tibetans contradicts their own political ideology and reveals their double standards.

Should this situation continue in the future, it will be impossible for Tibetans and those who follow the Tibetan Buddhist tradition to acknowledge or accept it.

Reacting to his statement, the Chinese government commented that whether [the Dalai Lama] wants to cease reincarnation or not … this decision is not up to him. When he became the 14th Dalai Lama, it was not his decision.

He was chosen following a strict system dictated by religious rules and historical tradition and also with the approval of the central government. It was also said that the Dalai Lama cannot stop reincarnating.

However, the Dalai Lama is confident that no one would trust the Chinese government’s choice.

The 14th Dalai Lama resigned from all political responsibilities in 2011, to minimize the potential damage arising from a Chinese selected 15th Dalai Lama.

Since then China has reiterated its position that re-incarnation must “comply with Chinese laws”, while U.S. officials stated that congress would refuse to recognise anyone chosen by the Chinese government.

However, the Dalai Lama plans on making a decision when he turns 90 in 2025.

However hard China may try to promote its Panchen Lama and potentially its own selected 15th Dalai Lama, Tibetan people will never acknowledge such an imposition on them, thereby undermining efforts of China trying to gain legitimacy in that matter.

The President of (the) Tibetan government in exile Lobsang Sangay is confident that Buddhists will not accept any Chinese move to appoint the next Dalai Lama.

Recently, he said that China has always defamed the present Dalai Lama, and the followers of the Dalai Lama will never accept Chinese claims.

Sangay was of the opinion that China wants to create confusion and divisions amongst the Tibetans with the emergence of two Dalai Lamas, one nominated by them and another by Tibetan people in exile.

In April 2019, U.S. Sen. Cory Gardner said at a hearing of the Senate Foreign Relations Asia Subcommittee that the Congress would not recognise a Dalai Lama chosen by the Chinese government.

More recently, the United States Congress has, on Dec 21st, approved a long-pending, amendment of the Tibet Policy and Support Act (TPSA).

It is a historic achievement for the Tibetan movement as the TPSA makes it official United States policy that decisions regarding the reincarnation of the Dalai Lama are exclusively within the authority of the current Dalai Lama, Tibetan Buddhist leaders and the Tibetan people.

Any interference by Chinese government officials will be met with serious sanctions and will be deemed inadmissible into the United States.