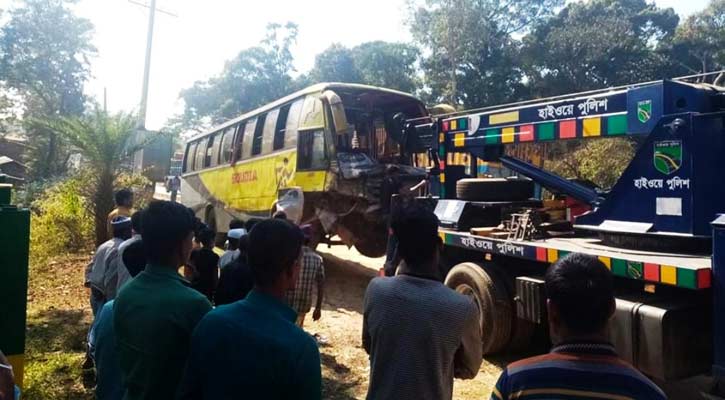 Two people were killed and five others injured in a head-on collision between a bus and a pickup van at Baraitali madrasa gate area of Chakaria Upazila in Cox's Bazar on Friday morning.

The deceased were identified as Mohammad Manik, son of Shafiqul Abbas of Pekua Upazila in Cox's Bazar and Md Babu, son of Mohammad Shahab Uddin of the same area.

The injured are - Atul Barua, Nishith Barua, Helasing Marma, Tafura Khatun and Mumtaz, all of them hailed from Lama Upazila of Bandarban.

Md Anisur Rahman, officer-in-charge (OC) of Chiringa Highway Police Outpost, said that a Chattogram-bound bus of Saudia Paribahan from Lama of Bandarban collided with the soil-laden pickup van coming from the opposite direction on Chattogram-Cox's Bazar highway, leaving two passengers of the bus dead on the spot and five others injured.