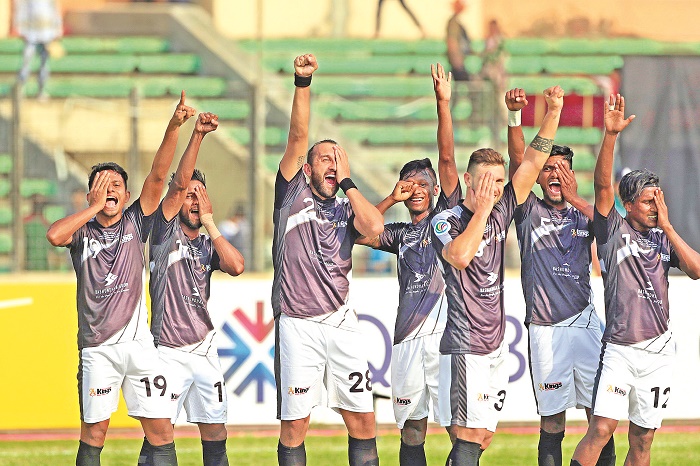 Bangladesh Premier League (BPL) Champions Bashundhara Kings made their debut in 17th AFC Cup 2020 memorable as they beat former Dhivehi (Maldives) Premier League Champions TC Sports Club by 5-1 goals in the Group E opener at Bangabandhu National Stadium (BNS) in the capital on March 11. Argentine Forward Hernan Barcos, who is also well-known for his nickname ‘El Pirata (The Pirate)’, scored a hat-trick scoring four goals in the goal-fest while Bashundhara Kings Captain-cum-Forward Daniel Colindres scored the rest of the goals.

Kings’ goalkeeper  Anisur Rahman Zico also proved his worth throughout the game. The Malidivian side netted one from the penalty in the 21st minute. Ismail Easa’s shot from the spot was fisted by Zico, but the Maldivian striker scored on the rebound. Zico sealed the fate of the game for his side in the beginning of the second half while he denied Easa’s spot-kicks twice.

Ahead of their maiden match, the big budgeted club took several eye-catching initiatives to bring the crowds to the field. They launched a campaign bus which trotted all over the capital and organised quiz competitions at various universities which had Bashundhara Kings’ jersey and match ticket as prizes. Besides, they also put a huge billboard to promote the match and country’s football as well as hanging huge banners at the stadium featuring their players on match day. Kings decorated the dressing room and constructed a temporary entry-tunnel like international stadiums to create mass hype.

Kings were put in Group E along with two other teams namely I-league Champions Chennai City Football Club and current Dhivehi (Maldives) Premier League Champions Maziya Sports and Recreation Club. However, AFC Cup 2020 was suspended due to the COVID-19 in March. Asian Football Confederation (AFC) decided to resume the tourney in Oct-Nov with a centralised venue format, but later the AFC committee abandoned the season in September.

In the meantime, the Bangladeshi top outfit made big changes in their team. They signed four fresh foreign recruits namely Argentine-born Chilean forward Raul Becerra, Brazilian midfielders Jonathan da Silveira Fernandes Reis and forward Robson Azevedo da Silva Robinho, Iranian defender Khaled Shafiei in the places of previous stars. According to a website named ‘Transfermarkt’, Becerra joined Kings for euro 1.10 million while Fernandes and Robson for euro 725 thousand each and Khaled for euro 500 thousand. The club also released some local players ahead of the domestic season 2020-21.

Kings are now eyeing AFC Cup 2021. The BPL champions will take part in the upcoming edition of AFC along with BPL runners-up and former champions Dhaka Abahani Ltd. The clubs had been selected for the competition based on the standing of season 2018-29 as the season 2019-20 was abandoned due to the pandemic COVID-19 outbreak.