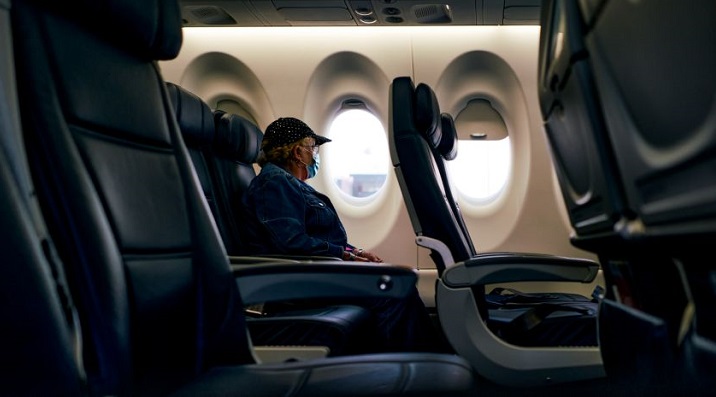 Several people have made headlines recently for traveling despite knowing they had either tested positive for COVID-19 or had symptoms of the disease. Wesley Moribe and Courtney Peterson were arrested and charged with reckless endangerment after flying home to Hawaii with their child on Nov. 29, despite being told to isolate after the couple tested positive for COVID-19.

More recently, a 69-year-old man, who reportedly had been experiencing COVID-19 symptoms, traveled with his wife on a Dec. 14 United Airlines flight from Orlando, Fla. to Los Angeles, Calif. He suffered a medical emergency on the flight and later died, with the coroner stating the cause of death was COVID-19 and acute respiratory failure, according to the Washington Post. The publication reported that the man’s wife was “heard telling medical workers on the plane that he had been experiencing symptoms, including trouble breathing and loss of taste and smell,” but he did not disclose any COVID-related symptoms on a pre-flight checklist.

Experts say that the message is out there about the importance of wearing face masks and physical distancing, as well as quarantining after testing positive for COVID-19 — which was recently shortened from 14 days to 7 - 10 days if a person tests negative and shows no symptoms after daily monitoring, according to the Centers for Disease Control and Prevention. So why do some people still travel despite either testing positive for COVID-19 or having COVID-19 symptoms, thereby endangering others?

Understanding why COVID-positive people may travel

Neda Gould, PhD, a clinical psychologist and assistant professor of psychiatry and behavioral sciences at Johns Hopkins Medicine, tells Yahoo Life that the behavior is “problematic” since “the consequences can be so dire for others.”

However, Gonsenhauser says it’s possible that people who are knowingly infected and travel anyway may be “making assumptions or rationalizations that are incorrect or misleading, which they ultimately think is OK.” Gonsenhauser notes that there has been “so much misinformation” surrounding the coronavirus, including some politicians who have downplayed the seriousness of the virus, despite the fact that more than 320,000 people have died from COVID-19 in the U.S. alone. Gonsenhauser says it’s possible that misleading information “led them to the conclusion that they’re not putting people around them at risk.”

Dr. Asim Shah, professor and executive vice chair of psychiatry and behavioral sciences at Baylor College of Medicine, tells Yahoo Life that it may be selfishness or denial that causes people in these circumstances to travel and put others at risk.

“But more than that, what we are seeing is in our country, unfortunately, people tend to push back against authority,” Shah says. During the pandemic, that can mean people refusing to wear masks or gathering with groups of people outside of their household. “They tend to use the wording of ‘rights’ or ‘civil rights,”’ Shah says. “While all that is true — that is your right,” he says that people don’t have “the right to hurt somebody else.”

Shah continues: “If you’re the only one who will be affected, maybe that’s OK. But people tend to forget by not wearing a mask and traveling while positive, you’re hurting others,” which is “infringing on someone else’s rights.” Shah adds: “The sad part is people are not realizing they are risking others.”

Gonsenhauser notes that in the U.S., independence is a value Americans “cherish.” But he says that we can still be a nation that makes a collective effort to stay safe during the pandemic without losing our independence. In the past, “when we’ve been engaged in large-scale national conflicts, there is that coming together,” Gonsenhauser says, “and instead of that happening, this was used as an opportunity to drive us apart and make enemies of each other and that’s so unfortunate. It’s interesting that so many people who stand on a platform of patriotism are choosing to not bear the responsibility that their nation is asking of them.”

Another explanation is that, given we’re almost a year into the coronavirus pandemic, Gonsenhauser says that COVID fatigue is a “very real affliction” that may also be a factor. “People are struggling, and they’re feeling isolated and worn down,” he says.

However, Gonsenhauser adds that for anyone who has recently tested positive, “it’s extremely important you observe quarantine isolation,” saying, “You do put those around you at very high risk when you’re traveling.”

But Gould notes that the cases of COVID-positive people traveling seem to be “few and far between” and that the “good news is that the message has gotten through to most people since we’re not seeing these instances a lot.” In the case of the couple who were arrested and charged, Gould says that the arrests will likely further “get the message across,” adding: “It’s unfortunate it has to go to that extreme. If that’s not a warning, then I don’t know anything that would be.”