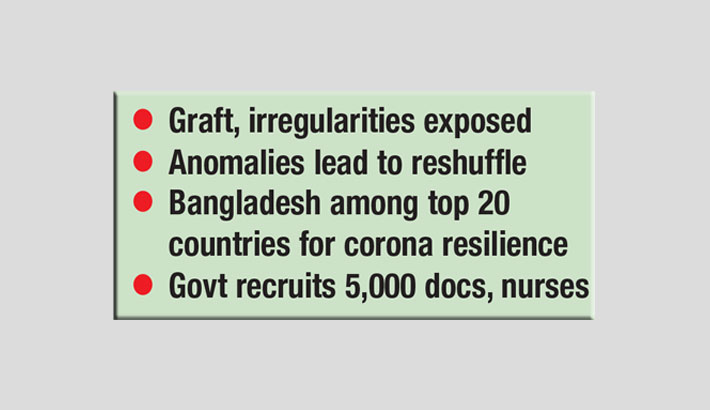 The health sector of Bangladesh faced its most challenging year ever in 2020 due to the coronavirus pandemic which has brought the entire world to its knee.

After initial inefficiency, mismanagement and indecision, effective measures were taken to tackle the coronavirus situation in the country which was recognised globally while the sector was mired by corruption amid the pandemic that resulted in reshuffle in the Health Ministry as well as resignation of the chief of the Directorate General of Health Services (DGHS).

The coronavirus pandemic, corruption and irregularities, reshuffle in the ministry and DGHS, and recognition for successfully facing the pandemic were some incidents of the outgoing year worth mentioning.

“The country’s health sector faced challenges in the year of 2020 due to the coronavirus pandemic while it has some achievements for successfully facing the situation. We’ve also enhanced our capacity recruiting several thousand doctors and nurses to ensure proper health services,” Md Abdul Mannan, Health Services Division secretary, told the Daily Sun.

Bangladesh has climbed four spots into the top 20 of Bloomberg’s latest monthly Covid-19 resilience rankings. It scored 59.2 in the rankings.

Health sector buckles under pandemicThe Bloomberg report published in December said Bangladesh performed admirably in many of the indicators, with 34 cases per 100,000, mortality rate of 1.6 per cent, 44 deaths per million and a test positivity rate of 10.2 per cent in the month of November – all on the lower side. Prime Minister Sheikh Hasina in November was made co-chair of One Health Global Leaders Group on Antimicrobial Resistance (AMR) along with Prime Minister of Barbados Mia Amor Mottley for the next three years.

The country’s health sector had to face coronavirus pandemic which is ravaging the entire world. The country has so far detected over 5.1 lakh infections and around 7,500 deaths from the virus which was first reported here on March 8.

It started tackling the Covid-19 challenge with its limited capacity, including inadequate physicians, nurses and other medical staff, insufficient isolation and quarantine centres, necessary medicine and testing kits as the virus infection has no recognised treatment anywhere in the world.

The government declared general holidays, shut all educational institutions and suspended all modes of communications in a bid to contain the virus. Although general holidays were cancelled and communications restored, schools, colleges and universities still remained closed. Several public examinations were also cancelled due to the coronavirus pandemic.

However, the government failed to implement its own directives during the lockdown and after businesses reopened as the use of masks, maintaining social distancing at markets and public transports are issues that remained unattended.

The procurement of Covid-19 vaccine for its citizens will be a big challenge for the government.

The government signed an agreement with the Serum Institute of India and Beximco Pharmaceuticals Limited for purchasing 30 million doses of Oxford-AstraZeneca Covid-19 vaccine.

It will procure 90 million doses of vaccine by June next to inoculating 45 million people against the virus.

The irregularities in supplying personal protective equipment, including N95 mask, by a company favoured allegedly by some officials of the ministry and the DGHS also came to the surface.

The involvement of officials in the scams led to major changes in the DGHS, including the removal of its director general, and the transfer of some high officials of the ministry.

The DGHS blacklisted a total of 14 contractors on charges of corruption, fraudulence and conspiracy as per the recommendations of the Anti-Corruption Commission (ACC). The ACC filed three cases against three blacklisted contractors over amassing illegal wealth worth around Tk 70 million.

Meanwhile, the Health Ministry identified around 3,000 unauthorised healthcare providers, including hospitals, clinics and diagnostics centres, across the country.

The country’s health sector witnessed major restructuring and reshuffling amid the Covid-19 pandemic over allegations of corruption and irregularities and to bring good coordination to face the pandemic.

The government transferred Md Asadul Islam, secretary of the Health Services Division who held a key position in the health sector, to other ministry. Additional Secretary (Administration) Habibur Rahman was also transferred from the ministry.

The ministry and the DGHS had locked horns following a press statement issued on July 11 where the latter said that “it had signed a contract with Regent Hospital for treatment of Covid-19 patients at the order the ministry high-ups.” The ministry sought an explanation from the DGHS for it.

In the passing year, the government recruited doctors, nurses and other medical staff to ensure proper health services for people and tackle the surging coronavirus pandemic.

The government appointed 2,000 doctors and 3,000 nurses to strengthen the medical services. It also promoted around 1,200 doctors during the time.

According to the DGHS, the process is underway to recruit 12,183 medical technologists, 1,650 medical technicians and 150 cardiologists very soon, once the ministry gives the necessary clearance.