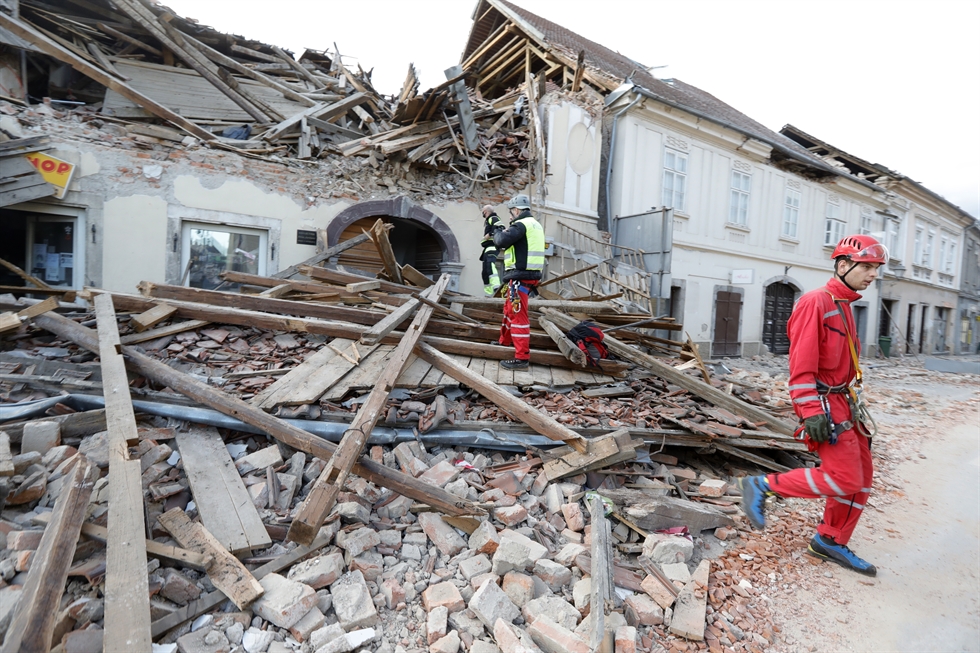 A search for survivors in Croatia stretched into the night Tuesday after a powerful earthquake killed at least seven people in the country's interior, tearing down rooftops and piling bricks in the streets.

The 6.4-magnitude quake was felt as far afield as Vienna but the heavy damage was concentrated in and around Petrinja, a town of around 20,000 some 50 kilometres (30 miles) south of Croatia's capital Zagreb.

Rescue teams shovelled away debris in search of victims as night fell after the mid-day tremor, while the European Union announced that more help was on its way.

Prime Minister Andrej Plenkovic said late Tuesday that seven victims had been found so far and that there would "probably be more".

Among the dead was a young girl in Petrinja, reported to be 12 years old, and at least five people in a nearby village, according to Croatian police, who said that around 20 people were injured.

Six people were rescued from the rubble with the help of dogs, Croatia's Mountain Rescue Service said.

Many in Petrinja were afraid to return home at night in fear of aftershocks, while damage from the quake left most of the buildings in the downtown area "unfit for use", according to construction experts.

"All the tiles in the bathroom are broken, all the dishes fell out," Marica Pavlovic, a 72-year-old retired meat factory worker, told AFP of the damage to her apartment.

"Even if we wanted to, we can't go back in, there is no electricity," she said, huddled with others in a downtown park, wrapped in blankets.

Some people opted to spend the night in their cars or stay with relatives in other cities, while nearly 200 took shelter in a military barracks.

In the nearby town of Sisak, also badly damaged by the quake, schools opened their sports halls to those who could not sleep at home.

The European Union's crisis management chief, Janez Lenarcic, said the bloc was preparing aid and that he would visit Petrinja on Wednesday.

Petrinja's mayor Darinko Dumbovic said a kindergarten was among the buildings that collapsed from the force of the quake. Luckily, it was empty at the time.

The earthquake, which hit around 1130 GMT according to the US Geological Survey, rattled Petrinja and the surrounding area just a day after a smaller earthquake struck in the same vicinity, causing some damage to buildings.

Josip Horvat, a 44-year-old artist, said that when Tuesday's tremor struck he was fixing a friend's chimney that had been damaged the previous day.

"I grabbed the gutter and I was just praying to God that it ends as soon as possible," he told AFP.

Tuesday's quake also shook the capital Zagreb, where panicked residents gathered in the streets as the shocks tore the tiles off roofs.

The tremors reverberated across neighbouring countries, including Serbia and Slovenia, which as a precaution shut down the Krsko nuclear power plant it co-owns with Croatia.

Zagreb is still rebuilding from a 5.3-magnitude quake that struck in March, the most powerful to hit the capital in decades.