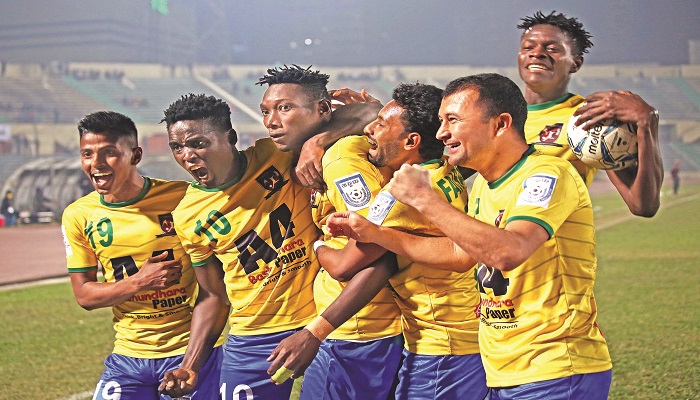 Sheikh Jamal Dhanmondi Club Limited started their campaign in the ongoing season’s curtain-raiser Walton Federation Cup 2020 with a 2-2 draw with Bangladesh Police Football Club in their first match of Group A at the Bangabandhu National Stadium in the capital on Sunday.

After the day’s draw, another participating team of three-team Group A Sheikh Russel Krira Chakra advanced to the quarterfinals as they beat Bangladesh Championship League (BCL) champions Police FC by 1-0 goal in the first group match last Thursday.

In the day’s match, Sheikh Jamal got an early blow while Police forward Shadin put his side ahead with a right-footer shot from inside the box in the 10th minute (1-0). After conceding the shocking goal, Sheikh Jamal tried hard to equalize the level, but failed to utilize their chances.

After the half time, Gambian defender Omar Jobe finally equalized the margin in the 51st minute with a right-footer close range shot from goalmouth melee (1-1). Sheikh Jamal tried to put pressure on their lowly opponents with attacking football, but their local defender Ariful unfortunately netted a suicidal own goal and put Police FC a 2-1 lead while he tried to clear the ball from goalmouth in the 78th minute.

In the day’s other match, Mohammedan Sporting Club Limited bagged an amazing 4-1 goals win over Muktijoddha Sangsad Krira Chakra in their second match of Group D at the same venue.

Nigerian midfielder Abiola Nurat scored a brace in the 80th and 83rd minutes while midfielder Habibur Rahman Sohag and defender Mohammad Atikuzzaman scored one each in the 42nd and 75th minutes respectively for Mohammedan. Uzbek forward Akbarali Kholdarov scored the consolation goal in the 68th minute for Muktijoddha SKC.

The 10-time Federation Cup champions Mohammedan SC Ltd conceded a 0-3 goals defeat to their arch-rivals and another participating team of Group D Dhaka Abahani Limited in the season’s first derby on Thursday.

Earlier, Saif Sporting Club brightened their chances for quarter-finals as they crushed lowly Brothers Union Limited by 6-1 goals in their second match of Group B at the same venue Saturday night.