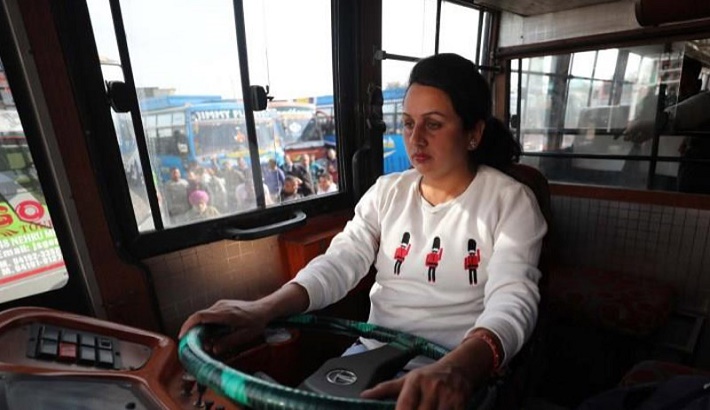 Jammu and Kashmir has got its first woman bus driver who drives passenger bus on the Jammu-Kathua road, inspiring many women into the profession. Pooja Devi, basically a driving trainer, adopted this profession because of her passion to become a professional driver.

The lady driver is receiving an overwhelming response from the people on every stop enroute Kathua or back to Jammu.

While driving the passenger bus on the Jammu-Kathua route, she is accompanied by her younger son.

“I was really amazed when my request was accepted by president Jammu-Kathua Road Bus Union, Kuldeep Singh, yesterday. He gave me a bus and encouraged me in the profession. He was the person who has trusted my skills in driving,” Devi added.

“I do not know how my family might be thinking now. Perhaps they might have realised that my choice of becoming a professional driver was not wrong. It was not only about fulfilling my desire, but also to help the family financially," she said.

Devi said that her family was financially weak and it was one of the factors that she had to come out to earn.

“I was getting Rs 10000 per month as a trainer from a reputed driving institution in Jammu. When I got a heavy driving license, I approached the union and they trusted my skills by handing over a passenger bus to drive on Jammu-Kathua road,” she added.

When asked why she chose this profession, she replied that if women can be pilots, doctors, police officers and do other kinds of jobs, why cannot they become professional drivers.

“On every stop, people welcome me and appreciate the decision. I have received so much affection from the people and the drivers. The response is surprising and encouraging,” she responded.

President, Jammu-Kathua Bus Union, Sardar Kuldeep Singh said: “It is a good step and women should come forward. I gave her the bus yesterday when she approached me. People are welcoming her at every stop.”