Climate migration in Bangladesh may increase 7-fold by 2050: ActionAid 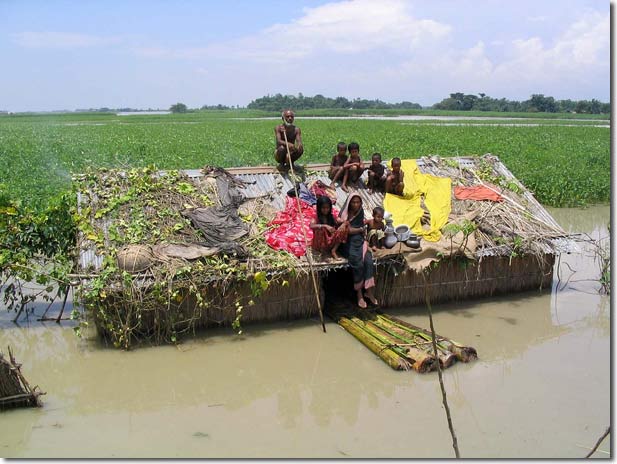 Bangladesh could see a seven-fold increase of climate migration, forcing 3 million people to migrate from their homes due to climate disasters by 2050.

This number is more than double the South Asia average, according to new research from ActionAid International and Climate Action Network South Asia.

Across South Asia, 63 million people will be forced to migrate from their homes due to climate disasters by 2050, if the global community fails to limit warming to well below 2°C, as per the Paris agreement goal, according to a press release from ActionAid.

New analysis estimates that climate migration will treble in South Asia by slow onset events such as sea level rise, water stress, loss of biodiversity and droughts. The region is also badly affected by extreme weather events like floods and cyclones. However, these were not included in this study. The research was undertaken by Bryan Jones at the Marxe School of Public and International Affairs, Baruch College, New York, one of the authors of the inaugural on internal climate migration in 2018.

The new research released on December 18, the International Migrants Day, has broadened the analysis to incorporate new drivers of climate migration, which includes loss of biodiversity and drought, alongside impacts on the water and agriculture sectors that were included in Groundswell report, and updated projections of sea-level rise.

Farah Kabir, Country Director, ActionAid Bangladesh said, “Our cities in Bangladesh don’t have the readiness to deal with climate induced migration. Although climate migration has become the only option for many, especially vulnerable communities who face repeated and intense disasters.

“The national budget shows us that there has been allocation of thousands of crores of taka for climate relevant investment, though the adequacy and effectiveness of the investment for the protection of vulnerable communities from climate related disasters remains questionable.

“The current system of social security that is operating in Bangladesh is more of a mere band-aid measure to the crisis. All future climate investment must focus on making migration an informed choice not a compulsion or last option for the women and children. Bangladesh alone cannot find the long-term solutions without global action."

“The current system of social security that is operating in Bangladesh is more of a mere band-aid measure to the crisis. All future climate investment must focus on making migration an informed choice not a compulsion or last option for the women and children. Bangladesh alone cannot find the long-term solutions without global action."

This is almost as many people as are forced from their homes globally due to war and conflict, raising the alarm that climate can no longer be overlooked as a major factor driving displacement.

Climate migration could easily surpass conflict as a driving force of displacement if political leaders continue to renege on their commitments to reducing greenhouse gas emissions in line with the Paris Agreement, the press release said.

Communities can be resilient to climate change, slow onset climate disasters, such as sea-level rise, drought, failed harvests and loss of biodiversity, but this takes money and political will.

The new report by ActionAid and partners Climate Action Network South Asia and Bread for the World calls for strong leadership and ambition from developed countries to cut emissions and support for developing countries to adapt to climate change and recover from climate disasters.

It recommends a holistic approach that places the onus on rich countries to provide support and urges developing countries to scale up efforts to protect people from climate impacts.

Dr Shamsuddoha, Chief Executive, Centre for Participatory Research and Development says: “Our recent study indicates that 83 percent of people who live in floodplain areas are directly impacted by riverbank erosion, with the majority of people being displaced multiple times.

“People living in the flood zones of Bangladesh are forced to migrate due to increased rate of river erosion, higher intensity of floods and unpredictable rainfall.

“This leads to a loss of livelihoods, agricultural land, and an increase in social conflicts within communities.

“South Asian leaders must join forces and prepare plans for the protection of displaced people. They must be supported by the rich nations in stepping up financial resources for universal and effective social protection measures, resilience plans and green infrastructure to respond to the climate crisis and help those who have been forced to move.”