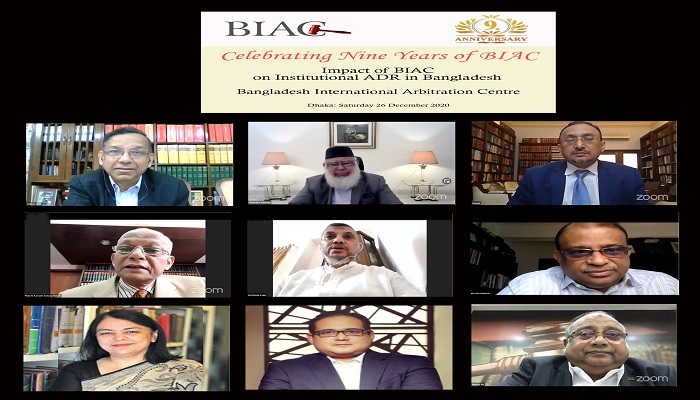 The government has enacted 'Use of Information Technology by the Court Act 2020' to ensure uninterrupted judicial functions through video conferencing amid corona pandemic.

“However, we are yet to go a long way regarding the virtual form of ADR. Suggested virtual ADR practices can either be based on phone conferences or video conferences,” he said.

The law minister said over 3.6 million cases are pending with various courts across the country requiring wide application of ADR to reduce case backlog.

Justice Md Rezaul Hasan of the High Court Division explained provisions of ADR in the Arbitration Act 2001.  He   gave   a   few   suggestions   for amendment to  existing   arbitration   law  to simplify the out-of-the court settlement of disputes.

Md Moinul Kabir, Secretary of Legislative and Parliamentary Affairs Division of the Ministry of Law,  termed BIAC an iconic institution in promoting arbitration and mediation.

He stressed promoting ADR to resolve economic disputes as Bangladesh is advancing fast in the fields of trade and commerce.

Quoting Bangladesh’s 189th position among 190 economies in the Enforcing Contracts Index of The world Bank Doing Business Indicators, he said “it is time for us to ensure business disputes to be resolved as much as possible before going to the courts.”