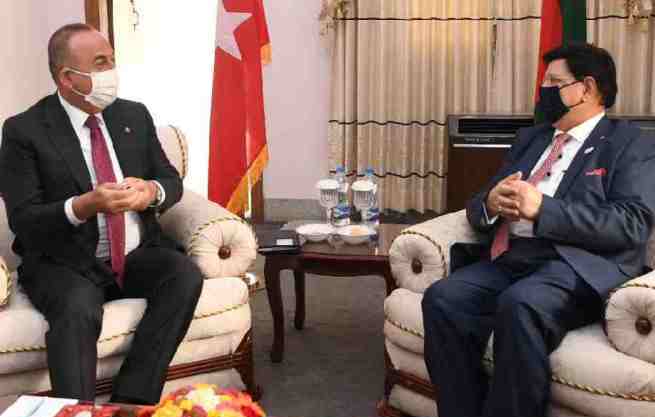 Turkish Foreign Minister Mevlut Cavusoglu said on Wednesday that Bangladesh has become a rising star in South Asia and a sustainable development model for the entire world.

After being impressed by the overwhelming course of development and one of the fastest growing economies, he came up with the remarks while addressing a joint press briefing with his Bangladesh counterpart AK Abdul Momen at state guesthouse Padma in Dhaka.

Mevlut Cavusoglu highly praised Prime Minister Sheikh Hasina for her "able and prudent" leadership and tireless efforts to change the course of national progress, braving a sea of challenges.

The two foreign ministers discussed the entire range of bilateral relations, including political relations, trade and investment, socio-economic developments of their countries, fight against the Coivid-19 pandemic, the Rohingya issue and cooperation in multilateral forum.

The Turkish foreign minister, who arrived in Dhaka on Tuesday on a two-day official visit, inaugurated the newly-built Chancery of the Embassy of Turkey at Baridhara Diplomatic Zone in Dhaka with the Bangladesh foreign minister on Wednesday afternoon.

“It has been around three months that the Bangladesh Embassy has been inaugurated in Ankara. These two events have brought us one step forward in our excellent bilateral relations,” Abdul Momen told reporters at the briefing.

Turning to the Rohingya issue, the Turkish foreign minister said hundreds of thousands of the forcibly-displaced Myanmar nationals have become a huge burden on Bangladesh.

He assured Dhaka of Ankara’s continuous support to resolve the crisis. The international community must share this burden.

He said the Rohingya population must return to their homeland Myanmar in a safe, dignified and voluntary manner and “this is one of the areas where the Turkey and Bangladesh will continue to work together.

Çavuşoğlu strongly supported Bangladesh government’s efforts to give Rohingyas better living conditions by relocating them to Bhasan Char until the repatriation takes place.

However, he has suggested the Bangladesh government work closely with the UN and its agencies engaged with the displaced population sheltered in Bangladesh.

Responding to a question, the Turkish foreign minister sought stronger support from the international community in terms of burden sharing, not just appreciative words but concrete steps.

Sources said Turkey has expressed its interest in selling defence equipment, including arms, to Bangladesh, in addition to investing in other large-scale projects.

The Turkish foreign minister has already discussed the issue with Prime Minister Sheikh Hasina and his Bangladeshi counterpart AK Abdul Momen, they said.

“We don’t produce everything. We’re producing 75 percent of our needs,” he told reporters at the briefing.

Cavusoglu congratulated Bangladesh on the occasion of the birth centenary of Father of the Nation Bangabandhu Sheikh Mujibur Rahman, being celebrated until December 2021 and 50 years of Bangladesh’s Independence, to be celebrated in March 2021.

The Turkish foreign minister began his day’s programme by visiting Bangabandhu Memorial Museum where he paid tributes to Father of the Nation Bangabandhu Sheikh Mujibur Rahman.