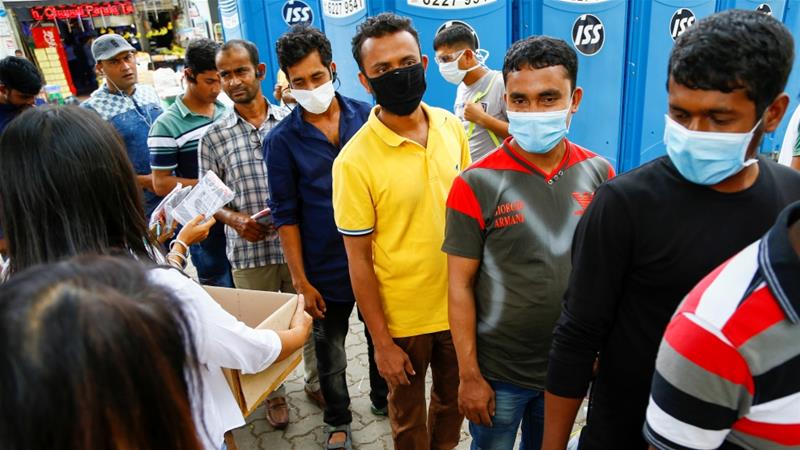 Several thousand Bangladeshi workers are waiting to return home from Lebanon after losing their jobs amid the ongoing coronavirus pandemic and economic havoc created by political turmoil in the Middle East country.

Sources at the Ministry of Expatriate Welfare and Overseas Employment say that the number of returnees will be around 10,000.

An official of the ministry, wishing not to be named, has confirmed it to the Daily Sun.

Abdullah Al Mamun, first secretary (labour) of the Bangladesh Mission in Beirut, said several thousands of Bangladeshi workers have applied to the embassy to go back home.

“We have already sent 6,500 workers home this year after getting their applications. More workers have been waiting,” he told the Daily Sun.

“The governments of both the countries, embassies and airlines are related to it. We are discussing the matter to consider their appeal,” he added.

Some 326, 758 migrants have come back home till November 30 after the corona pandemic started spreading worldwide.

Ministry sources say the government has already decided to bring these stranded workers back as the workers have applied to the embassy expressing their willingness to come back home.

According to government sources, some 150,000 Bangladeshi workers, including unregistered ones, work in the country of four million people.

Officials at the ministry said that complexity has arisen over bearing the travel cost of the workers.

The government is not interested in spending money for the workers who are not registered with them, they add.

Expatriate Welfare and Overseas Employment Secretary Ahmed Munirus Saleheen said the government is not facing any pressure at present from any labour-receiving country for taking back Bangladeshi migrant workers.

“Lebanon is going through an economic crisis. Our workers are struggling there to meet their daily expenses. Therefore, they are trying to return. There is no pressure from the Lebanon government regarding the matter. Actually, workers of all countries in Lebanon are facing a similar situation,” he said.

“We discussed the issue in an inter-ministerial meeting chaired by the Foreign Minister and decided to take all initiatives to bring back the workers gradually,” he added.

Taking their return into cognizance, the ministry has decided to extend support to the workers after scrutinising each of their situations individually.

The authorities concerned have asked Bangladesh’s ambassador in Lebanon to coordinate the cases and recommend the names of the workers who truly deserve support from the government.

They also advised the Bangladesh embassy in Beirut to prepare a list of workers who want to return to the country and add all personal information of them in separate form.

Asked about the return of the workers, officials at the Bangladesh embassy say they might want to go back home due to economic hardship.

A sharp fall in the value of Lebanese Lira against the US dollar has pushed the migrant workers in a difficult state in the country, they say.

Workers say that prices of food and other essentials have increased by three to four times in Lebanon and it has become almost impossible to survive and make any savings.