Was not the best game we can play: Bruzon 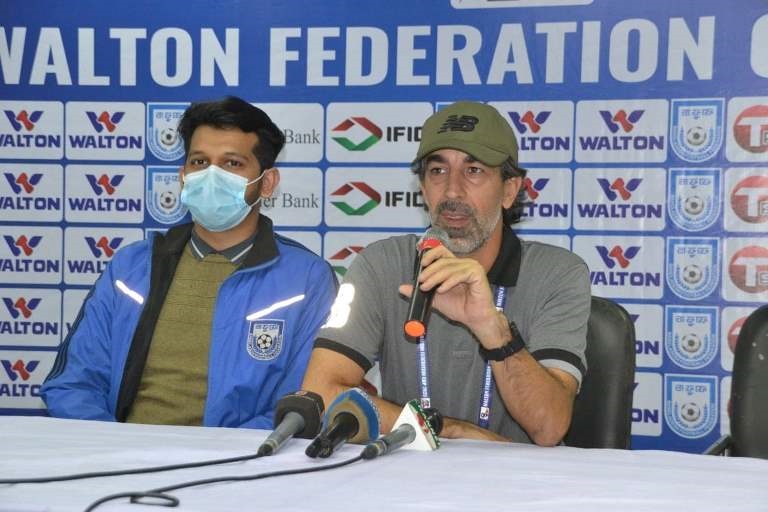 Bashundhara Kings Spanish coach Oscar Bruzon said that he was satisfied with the win against Rahamatgonj MFS in the Fed Cup opener but it was not their best game.

“The first match of the competition is always difficult. In the first half, it took 25 to 30 minutes to have the full control of the game. We were having some problems in the building up in the creation especially in central areas.

But in the moment we find to put the central midfielders three on them in different heights. We are perfect to play more vertical. I'm quite satisfied but it was not the best game that we can play. Anyway, It’s a win, qualification for the final stage almost, let’s keep growing from this game,” Oscar said in a post match press conference at Bangabandhu National Stadium (BNS) on Tuesday.

Argentine-born Chilean forward Raul Oscar Becerra and Robson Azevedo da Silva Robinho netted one goal each for the winning team while a suicidal own goal by Rahamatgonj’s Egyptian defender Alaaeldin Naser Flsayed Eissa sealed the fate of the match.

Kings wasted six to seven close chances of scoring in both halves. In the first half, a volley from Argentine-born Chilean forward Raul deflected wide in the 2nd minute, Brazilian forward Robinho shot the target off in the 10th minute.

The misfortunes followed Raul as the 33-year-old Brazilian wasted another close chance in the 12th minute. In the second half, Robinho's right-footed drive from inside the box narrowly missed the target in the 61st minute after Jonathan’s lowly shot was denied by Rahamatgonj goalkeeper Rasel Mahmud Liton in the 50th minute.

“Raul is the top scorer, he just joined the group two and half weeks before. First, we don’t want to take him injuries and second his fitness level today is something 80-85 percent. Last year, we brought a lot of national team players, we didn’t know about them. Last year, we learned from the national team players and the foreigners we chose this year completely according to the strength and weaknesses of local players. This is the reason our team this year is far more better, more balanced than last year,” Kings coach added.

Rahamatgonj MFS coach Syed Golam Jilani said that his local boys did their best in the day’s game against their giant opponents.

“It was our first match against the top-ranked team of Bangladesh Bashundhara Kings. In terms of preparation, we were lagging behind them because we got a month of training only. I think my players did their best in the day’s match without foreign players and with short term preparations. They did what I was told to do. But unfortunately, we badly conceded the second and third goals,” he added.