Indian HC recalls participation of his father in the Liberation War 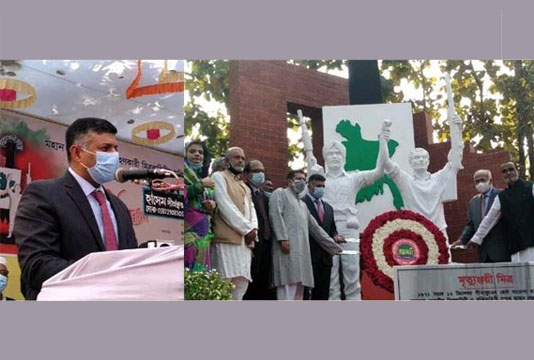 Indian High Commissioner to Bangladesh Vikram Kumar Doraiswami said he is proud of his father’s participation in the Liberation War as a pilot.

"My father took part in the Liberation War as a pilot. So, I am very proud. Our friendly relationship with Bangladesh is not only historical and cultural, it is a blood relationship," he said.

Vikram Kumar Doraiswami was addressing inauguration of a sculpture titled “Mrityunjayi Mitra” at Sitakunda upazila of the district to pay homage to the sacrifices made by Indian soldiers during the Liberation War of Bangladesh.

The high commissioner said that India had cooperated a lot during the war of independence of Bangladesh. As a result, many Indian soldiers were martyred along with the freedom fighters, he added.

He said that Bangladesh-India friendship will last forever.

On 12 December 1971, the Indian Allied Forces and the Mukti Bahani took up positions at various places in the Kumira area from Chhota Darogarhat in Sitakunda Upazila in preparation for the war and with the help of local patriotic people and attacked on the Pak occupation forces from 10 pm on that day.

This frontal battle was fought from 12 to 16 December and on 16 December Sitakunda was liberated from the Pakistani invaders.

In this heroic battle, innumerable members of the Allied and Liberation Army were martyred. The bodies of more than fifty Allied martyrs were cremated at the Chandranath Temple area at Sitakunda Sadar and the freedom fighters were buried at Upazila Health Complex of Sitakunda upazila, local sources said.