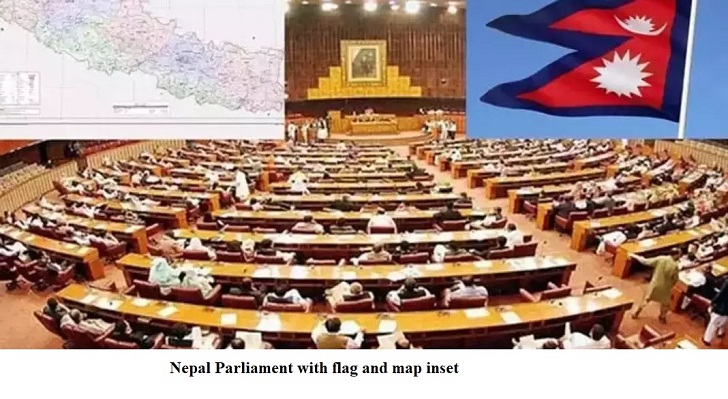 Nepal Prime Minister Khadga Prasad Sharma Oli has surprised his detractors and acolytes alike as also the Chinese envoy, who has been doubling up as a political peace broker, with his decision to dissolve Parliament and to go for general elections in April- May. It is doubtful whether he had sounded Ambassador Hou Yanki of his move, which is unlikely to end faction feud in the ruling Nepal Communist Party (NCP). It may, in fact, exacerbate faction fights, going by the resignation of seven ministers of Dahal-Nepal faction soon after Oli opted for snap polls.

Whether Oli decision was constitutionally right or wrong is an issue for the egg-heads to debate in their intellectual addas. The debate in no way alters the reality that the beleaguered prime minister has pushed himself into a corner with his one upmanship games even after it became clear that he was on a sticky wicket in both the party and Parliament. Chinese envoy Hou Yanki only complicated Oli’s problems with her ‘Open Shuttle Diplomacy’ to bring peace between him and his NCP co- chair, the formidable Pushpa Kamal Dahal, Prachanda. Clearly the Sunday development has exposed the limitations of Dragon in the Kathmandu theatre.

Oli and Prachanda differ temperamentally, and even in their politics though China -fixation is common to both.

Oli has cut his teeth in overground politics; nationalism and anti-India plank are his USP which led him to the victory stand in the general elections held two years ago. Prachanda was the hero of the underground as he led his campaign against monarchy though by the time of the ballot in 2018, he was a pale shadow of his former self, and saw merit in merging his CPN (Maoist) with Oli’s CPN(UML).

NCP was born thus before the last election; the partners entered the fray sharing the seats on 60-40 basis. The electorate rewarded them handsomely – 174 seats in the 275-member Pratinidhi Sabha, the Lower House of Parliament. And heralded troubles rooted as much in personality clashes as in sharing power. Fighting elections was an easy task for UML and the Maoists but merger right from the national level down to the grassroots, that is the Village Development Committee, VDC level has proved to be an onerous task.

The merger process is still not complete to the satisfaction of cadres. And at the national level, differences came out into the open by the end of first year in office, and over the last year have led to hardening of attitudes on both sides. Whatever be the contributing factors – Prachanda and many other top party leaders accuse of Oli’s taking unilateral decisions on important matters, the fact of the matter is that Prime Minister had lost ground in party’s powerful 9-member Secretariat, 45-member Standing Committee and the 445-member Central Committee.

The situation turned grievous for Oli when he brought two ordinances, without discussions at any party forum apparently fearing a repeat of 2016 fiasco that ended his first innings in power. That year a no-confidence motion was brought in Parliament against his government by Prachanda in league with Opposition Nepali Congress. He resigned and Prachanda took over the reins.

The new laws were primarily aimed at saving his government in the event of political troubles to his regime. Oli sought to ease conditions for triggering split in a political party with an eye on drawing sustenance from a section of the Samajwadi Party, considered favorable to him in case a Vote of No Confidence in Parliament. But opposition from within NCP forced him to roll back these laws within four days of their promulgation in April last.

This led to the widening of rift between Oli and Prachanda; voices of dissent within the NCP increased and Oli faced charge of running the party and the government unilaterally; failure on multiple fronts, Covid 19 pandemic including led to demands for Oli’s resignation as Prime Minister as well as party’s co-chair.

Chinese Ambassador in Kathmandu, Hou Yanki, held one-on-one meetings with NCP leading lights. Her political diplomacy took her to the doors of Oli, Dahal, Madhav Nepal, Vamdev Gautam and other top leaders with the message – adopt a conciliatory approach and do not precipitate a split. Chinese President Xi Jinping also had a telephonic talk with Nepalese President Bidya Devi Bhandari. Result: the tall Nepalese leaders patched up. And Oli remained Prime Minister and co-chairperson of the party as well.

The truce, however, was short lived. The wrangling resurfaced in a big way in August with Prachanda group blaming Prime Minister Oli of functioning in an autocratic way and not taking the party into confidence on important national issues. The demand for Oli’s resignation became highly vocal but he appeared to weather the storm resolutely.

A meeting of the Standing Committee held in early September hammered out a power sharing agreement between Oli and Prachanda. It assigned party work to Prachanda as its Executive Chairman while Oli continued as Prime Minister and party’s Co-Chairperson. The Standing Committee also asked Prime Minister to resolve the Kalapani border dispute with India through political and diplomatic channels.

But in November, the two warring groups headed for a showdown with Executive Chairman Prachanda blaming Oli on several counts – bad governance, worsening Covid 19 situation, and above all corruption. On 13 November, he presented a political document to the powerful Secretariat in which his group enjoys majority. Oli submitted his own political document a fortnight later giving point by point rebuttal.

Denying all the charges against him, Oli told Prachanda “if we cannot walk together, let us walk on our own” hinting at a split in the party. He also said that the leadership issue should be decided only in the 445-member Central Committee which was slated to meet not before coming April. A meeting of the Standing Committee was called for 6th December but Oli skipped the meet.

The NCP has had a near two third majority in Parliament but thus faced an existential threat both to its government and the party. It popped up several scenarios, all under the Chinese shadow. Firstly, a patch up between the warring groups as Chinese Ambassador held separate meetings with Oli and Prachanda. Reports say she asked them not to split the party as it could weaken the Communist movement in Nepal. Chinese Defence Minister Gen. Wei Fenghe was in Kathmandu on 29 November apparently with the same message from Beijing. He arrived in the Nepali capital close on the heels of Foreign Secretary Harsh Shringla’s visit on 26 and 27 November to give momentum to Nepal – India ties struck up for a year over Kalapani dispute.

Another scenario that appeared tantalizingly was the possibility of remitting the thorny leadership issue by the party Secretariat (its meeting was called for 13 December) and the Standing Committee (scheduled to meet on 20 December) to the Central Committee meeting to be held in April. Both ways Oli could have got a reprieve to the delight of Dragon with its lengthening shadow over the Himalayan country.

Well, the turn of events in Nepal show how political instability is shaping up men and matters brought up on a diet of demagogy with authoritarian impulses.

Also, how Chinese recipes have a limited shelf-life, and risk the danger of ending up as bull in a China shop since they are not cut out for the cut and thrust of democracy.