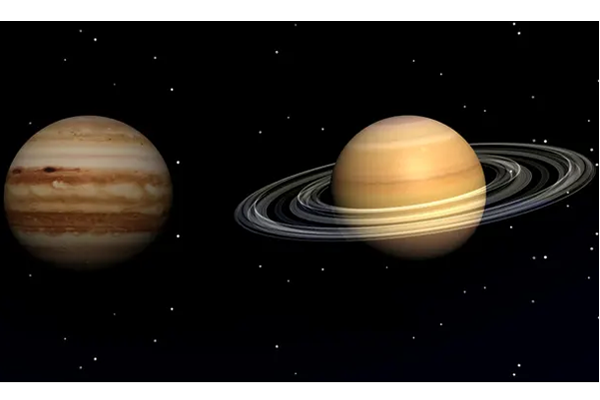 Normally, Patrick Wiggins would be excited to have people come to the Stansbury Park Observatory in Tooele County to see a cosmic event.

However, coronavirus has ruined yet another opportunity.

“We haven’t done anything for the public at the observatory all year,” said Wiggins.

No star parties. No comet viewings. Nothing.

“We’ve had star parties every year until this year,” said Wiggins, who is also NASA’s solar system ambassador to Utah. “It’s really unfortunate. But on the upside, you don’t need a telescope to see this,” he said, referring to a cosmic event that can be seen by the naked eye.

For the past few months, near the moon at night, Jupiter and Saturn have been getting closer.

This Monday they’ll appear closer than they have in nearly 400 years.

“It’s a rare event. I’ve been cautioning people don’t expect a really flashy event,” Wiggins said. “But it’s something that doesn’t happen that often. The last time was in 1623.”

Since the Jupiter-Saturn conjunction, as Wiggins calls it, is happening so close to Christmas, many people are calling this event the “Christmas Star.”

That’s also why Wiggins is trying to caution expectations.

“It’s going to be fairly bright, but it’s not going to be like what people think of in biblical terms,” he said.

The conjunction will happen in the southwest part of the sky.

However, it could be tricky to see for those who are near western mountains because it’ll be low along the horizon.

“There’s already people I know I’ve heard from and they’re planning on going out to the Salt Flats because they get a nice flat horizon out there,” said Wiggins.

If you miss this one, the next conjunction of these two planets will be about 60 years from now, which means some people could see it twice in their lifetime.

“If you take your kid out to look at this event, have them draw a picture or something and keep it because they’re probably going to be around in 60 years,” said Wiggins. “They’ll be able to bring out this little paper that they drew when they were a little kid back in 2020 and say. ‘Hey, look what I did way back then and you’re getting to see it now.”

He also enjoys the feeling you get when looking at something in the sky that doesn’t happen very often.

“It’s a rare event. And how often can you go out and say, ‘Hey, I’m looking at something that no one alive today has ever seen before,” he said.