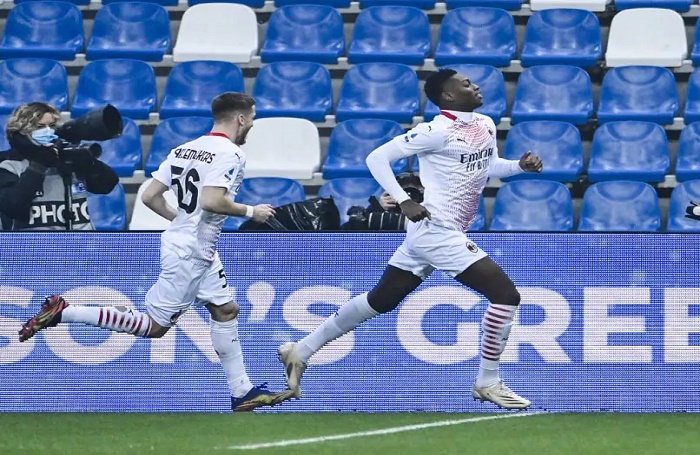 AC Milan forward Rafael Leao scored the fastest-ever goal in Serie A history on Sunday, netting after just six seconds in a 2-1 win at Sassuolo which kept his side top of the table ahead of city rivals Inter Milan.

Milan, chasing a first Serie A title since 2011, launched straight onto the attack from kick-off, with Turkish midfielder Hakan Calhanoglu setting up Leao to slot home the rapid opener.

The previous fastest goal in the Italian top flight had been Paolo Poggi’s for Piacenza against Fiorentina in December 2001 after eight seconds.

Milan have a one-point advantage on Antonio Conte’s Inter who beat Spezia 2-1, with champions Juventus four points behind the leaders in third after a 4-0 win over Parma on Saturday.

“We have four or five kick-off patterns. (Leao) was prepared,” said Milan coach Stefano Pioli whose side had been held 2-2 in both their last two league games against Parma and Genoa.

“Winning this match counts for a lot psychologically.”

Portuguese Leao, who usually plays on the left wing, started at centre-forward with star striker Zlatan Ibrahimovic still out with a leg muscle problem and his replacement Ante Rebic also injured.

It was the 21-year-old’s third league goal this season and fourth in all competitions.

“We had prepared it in training,” said Leao.

“This game was important for us, because we had lost some points in the previous matches.”

Calhanoglu thought he had scored a second on nine minutes when he put home a Leao cross but the goal was disallowed for offside after a VAR review.

Domenico Berardi pulled a goal back late for Sassuolo, who sit sixth after the defeat.

At the San Siro, Inter Milan extended their winning league run to six matches with Achraf Hakimi getting the first goal five minutes after the break.

Romelu Lukaku slotted in a penalty on 71 minutes for his 11th league goal this season after a M’Bala Nzola handball.

“This is our sixth straight Serie A win, we welcome these results because consistency will keep us competing at the top,” said Conte.

“We didn’t create a huge amount but we conceded almost nothing, it was a deserved win.”

Roberto Piccoli got a goal back for Spezia, who are just above the relegation zone after extending their winless run to six games, deep into injury time.

Atalanta came from behind to crush Roma 4-1 in Bergamo despite playing without captain Papu Gomez who has fallen out with coach Gian Piero Gasperini.

But Josip Ilicic came off the bench after the break to inspire the Atalanta recovery, setting up Duvan Zapata for the equaliser just before the hour mark and crossing for Robin Gosens to head in 10 minutes later.

Colombian Luis Muriel scored the third a minute after coming off the bench on 72 minutes, before Ilicic got his first league goal of the season with an impressive solo run five minutes from time.

Atalanta, with a game in hand, are seventh in the table, 10 points off AC Milan.

Roma, in fourth, missed the chance to move level on points with Juventus, and are just ahead of Napoli who fell 2-0 at Champions League rivals Lazio.

Ciro Immobile headed home in the ninth minute, with the Italian forward setting up Luis Alberto for the second on 56 minutes following a blunder in the Napoli defence.

Napoli were playing without injured Nigerian striker Victor Osimhen and club record scorer Dries Mertens with captain Lorenzo Insigne suspended for insulting the referee in their defeat at Inter Milan last time out.

Lazio are eighth, level on points with Atalanta.