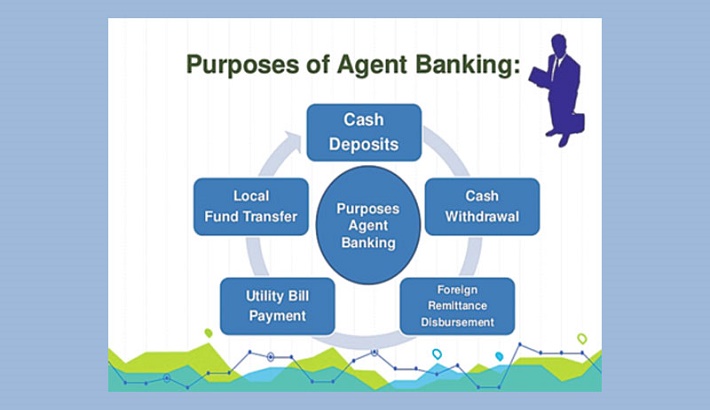 The number of agent banking accounts stood at 87.86 lakh in October. Of the accounts, 68.06 lakh accounts were in rural areas and 19.8 lakh in urban areas.

On the other hand, loan disbursement through the agent banking service also rose despite the corona pandemic. Total loan disbursement stood at Tk 10.87 billion till September this year, posting a 61.3 per cent rise over the first quarter.

BB issued the agent banking guidelines in 2013 to take banking services to the remotest corners of the country.

Some commercial banks have proven their excellence by opening a large number of agent banking outlets and operating those across the country with policy support from the central bank, he added.

IBBL Managing Director Md. Mahbub ul Alam said, “Agent banking offers limited banking and financial services to the underserved population by engaging representatives under a valid agency agreement. It is the owner of an outlet who conducts banking transactions on behalf of a bank.”

Besides, the funds mobilised from the agent banking wings are also enhancing the financial strength of the banking sector, Mahbub ul Alam said.

In October, banks disbursed loans of Tk 18.4 billion to their customers through the agent banking service. Of the amount, Tk 0.98 billion was disbursed in the rural areas and Tk 0.86 billion in urban areas.

Banks’ credit issuance through their agent banking windows was only Tk 0.39 billion in October 2019.

BB data also show that the transaction volume through agent banking system jumped to Tk 323.51 billion at the end of October from Tk 301.18 billion in the previous month and Tk 151.78 billion a year ago.

Resources would flow towards the urban areas if banks remain reluctant in issuing credit to people in the rural areas through their agent banking windows, they said.

Taking the issue into consideration, the central bank is pursuing banks to put emphasis on credit issuance by their agent banking wings.

Although the loan disbursement increased in recent months, the volume still remained low in proportion to the deposit collected from the agent banking wings.