Yemen: Plea to save conjoined twins 'in critical condition' 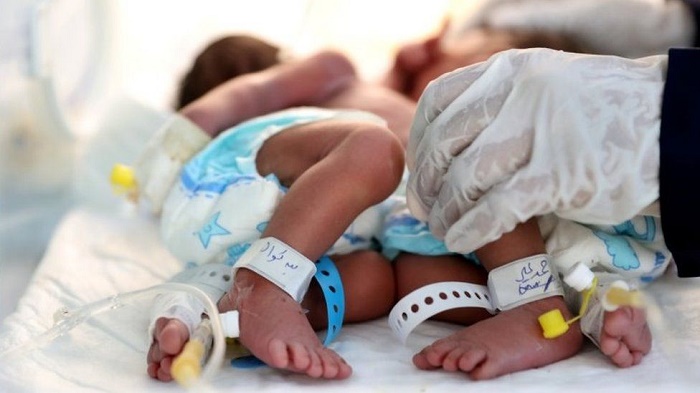 Doctors in the Yemeni capital Sanaa have called for urgent help to save the lives of conjoined twins who were born on Wednesday.

The head of the al-Sabeen hospital where the boys were born said they were in a "critical condition" and needed surgery that can only be done abroad.

Sanaa's airport is shut due to Yemen's long-running war, which has devastated an already fragile health system.

A Saudi Arabia-based aid centre said it was examining whether it could help.

"An echocardiogram showed that each of the two children had their own heart, though the position of the heart of one of them is not normal," Al-Sabeen hospital director Majda al-Khatib told the AFP news agency.

She said the hospital did not have the necessary equipment to accurately determine "which organs are connected".

Responding to the appeal, the King Salman Humanitarian Aid & Relief Centre tweeted: "#KSrelief states its readiness to have their case examined by medical professionals in Saudi Arabia and look into possibility of separating them [the twins]."