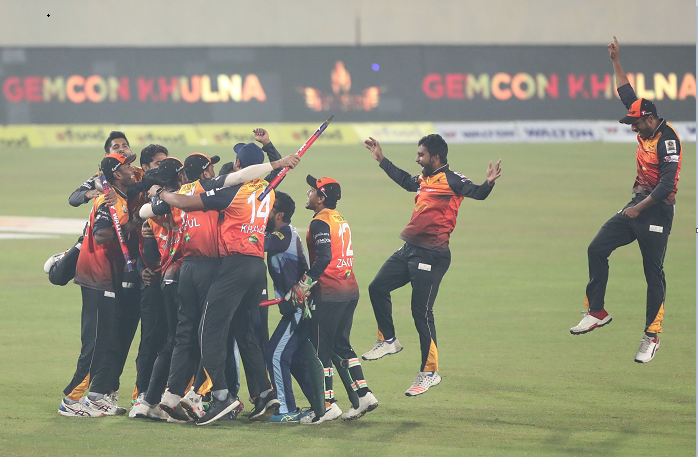 In a see-saw game, that changed the complexion quite a several times, Mahmudullah played the key role, hitting a magnificent 48 ball-70 not out, which helped Khulna recover from a shaky to compile a fighting 155-7.

Chattogram, the most successful side in the group phase, kept them in the hunt before losing their way in the final over and eventually was restricted to 150-6.

After beating Khulna twice in the group phase, Chattogram tasted defeat to Khulna in both knock out matches—first in first Qualifier and then in this final.

With this trophy, Mahmudullah achieved the domestic double after also securing BCB President Cup, a one-day format tournament, as a captain. Both the tournaments were part of Bangladesh Cricket Board’s plan of bringing cricket back in the country after the lengthy COVID-19 induced break.

Mahmudullah’s knock was studded by eight fours and two sixes, most of which came at the death overs to help Khulna amass a fighting total.

Being sent to bat first, Khulna received a huge setback when inform opener Jahurul Islam was out in the first ball of the innings after holing out one at mid-off off Nahidul Islam for naught.

Nadihul then gave Khulna another setback, getting rid of Imrul Kayes for 8, leaving them at tricky 21-2.

Young opener Zakir Hasan looked to be determined to make his innings bigger after getting the start but he played one shot too many to be out for 25 off 20, that included three fours and one six.

Mahmudullah then came to the crease and saw Ariful threw away his start, by edging one to wicket-keeper for 21.

Unfazed by the colleagues’ manic dismissals, the captain played shots all-round the wicket to keep the scoreboard rotating and gave it much-needed pace. But he lacked a support at the other end as wickets tumbling at regular interval.

As it looked, Khulna would have to be pleased with below par score, Mahmudullah scored 17 runs in the last over to help the side propel past 150 runs mark, which later proved to be decisive.

Chattogram looked to have a promising start when Liton Das and Soumya Sarkar dealt with the Khulna bowlers in aggressive way. But the ultra-aggression caused the downfall of Soumya for 12 after which captain Mohammad Mithun (7) and Liton Das (23) were removed in quick succession.

Khulna bowler not only removed the trio in short space but also stifled the innings to increase the asking run rate.

Shykat Ali came up with proper response as he negotiated the Khulna bowler with utmost confidence. He firstly got a support from Shamsur Rahman (23) with whom he shared 45-run to bring the side back in contention.

After Hasan Mahmud broke the partnership, dismissing Shamsur, Shykat and Mosaddek Hossain kept the side in the hunt but a disastrous last over in which they needed 16 runs, Chattogram lost both of them and their hopes got ruined.

Shykat was out for 53 off 45, hitting four sixes while Mosaddek made 19.

Shohidul was the most successful bowler for Khulna with 2-33 while Shuvagata Hom, Al-Amin Hossain and Hasan Mahmud bagged one wicket apiece.