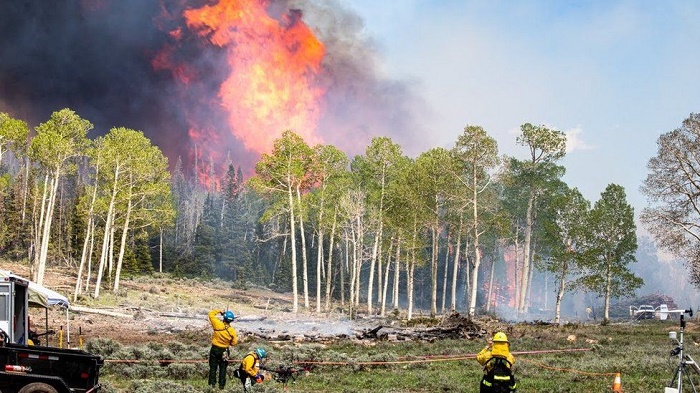 Smoke from wildfires could be a surprising new route for the spread of infections, according to research.

Scientist say that microbes and fungi can survive in large numbers in smoky plumes.

The authors believe it's likely that organisms from the soil, known to cause infection, could be transferred in this way.

They argue that greater monitoring of wildfire smoke by health authorities is urgently needed.

For decades, it has been widely assumed that nothing much lives in a plume of wildfire smoke.

It has also been assumed that if smoke poses a threat to human health, it's because it is full of particulate matter.

These microscopic particles of soot are known to be a severe irritant, causing respiratory and cardiovascular issues.

However, there has been growing concern that wildfire smoke could also carry infectious microbes or fungi.

The US Centers for Disease Control (CDC0 says that firefighters are at risk of coccidioidomycosis, a common infection caused by a fungus that becomes airborne when soils are disturbed.

Scientists are now beginning to uncover the scale of the potential infectious threat posed by smoke from wildfires.

Using new techniques to capture microbes in smoke, researchers say that they found over 900 different types of bacteria and around 100 unique fungi.

"The diversity of microbes we have found so far in the very few studies that have been done is impressive," said Dr Leda Kobziar, from the University of Idaho, in Moscow, US, who led the review.

"These taxa (groups of living organisms) were not found in non-smoky air in the same locations prior to the fire, proving that combustion and its associated winds aerosolise microbes into smoke columns."

The researchers believe that the microbes hitch-hike on particulate matter in the smoke.

Even in high-intensity fires, the scientists found bacteria in abundance 300 metres above a fire. Over 60% of these were viable.

They suspect that the particulate matter on which they are travelling protects the microbes from ultraviolet radiation, which might kill them off.

While the scientists have shown that there are large numbers of bacteria in smoke and that they can survive in the plume, the key question is how much of a threat to health do they pose?

"We have found a number of microbes that are commonly known to cause respiratory ailments - things that can trigger asthma, for example," Dr Kobziar said, via email.

"The likelihood of soil and plant-borne organisms known to cause infection is high, but has yet to be experimentally tested."

Previous studies with hurricanes and storms have shown that these infectious agents can travel extremely long distances, although no one has yet shown a similar journey for bacteria in a smoke plume.

But the ability of smoke to travel around the world suggests that it could be a "missing link" in explaining some patterns of infection.

"When infections are detected in patients, the potential causal agents that are screened are based on what is known to be endemic in a given region," said Dr Kobziar.

"However, smoke blurs the lines between regions. It may be that many cases of infection with undetermined causal agents have occurred due to smoke transport of microbes outside of their areas where it is endemic.

"It may be that smoke is the missing link to explain some of these patterns of infection across space and time."

She added: "This could also have ecological ramifications."