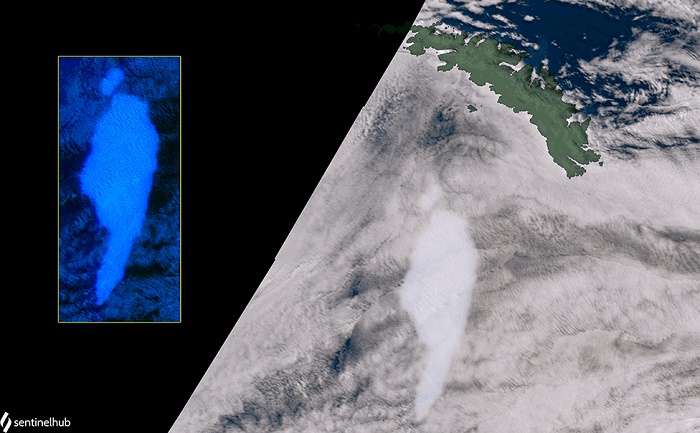 The icy colossus that is A68a has knocked off a corner, seemingly as a result of striking the seafloor.

The 3,800-sq-km iceberg, which has been bearing down on the island of South Georgia, looked in recent days to be turning with the prevailing current.

But as it spun around, it appears part of the frozen block may have scraped the bed, inflicting damage on itself.

Satellite images on Thursday revealed a roughly 150-sq-km chunk to be floating free of the main berg.

The new piece of debris is so large that it's likely from now on to be called A68d, under the iceberg nomenclature operated by the US National Ice Center.

Two other large lumps that broke away previously from the primary block were designated A68b and A68c.

Originating in Antarctica in 2017, A68a is the world's largest iceberg "in the open ocean". There is another great tabular berg called A23a which is slightly bigger but this has hardly moved from its calving position at the Filchner-Ronne Ice Shelf in the Weddell Sea.

It's running in a fast stream of water known as the Southern Antarctic Circumpolar Current Front, which is one of the White Continent's main export routes for ice.

The SACCF is like a conveyor belt that routinely delivers icebergs to the vicinity of South Georgia. Indeed, it's often said the British Overseas Territory is "where icebergs go to die" because so many get caught on the island's shallow continental shelf and end their days melting to nothing.

Scientists are watching A68a with greater than normal interest. Its great bulk means that if it anchors at South Georgia, it could pose feeding problems for the island's famous penguins and seals.

Such a major obstacle sitting right offshore might restrict the animals' ability to forage for the fish and small crustaceans called krill on which they depend.

Satellites are following the trajectory of the berg day by day. As predicted, it has turned with the SACCF at that point where the current gets deflected by continental shelf.

If A68a continues to drift in SACCF, it should loop south around the island before turning north.

Why A68a has little to do with climate change

The iceberg came from a part of the Antarctic where it is still very cold - the Larsen C Ice Shelf. This is a mass of floating ice formed by glaciers that have flowed down off the eastern side of the Antarctic Peninsula into the ocean. On entering the water, the glaciers' buoyant fronts lift up and join together to make a single protrusion. The calving of bergs at the forward edge of this shelf is a very natural behaviour. The shelf likes to maintain an equilibrium and the ejection of bergs is one way it balances the accumulation of mass from snowfall and the input of more ice from the feeding glaciers on land. Larsen C calves big icebergs like A68 on decadal timescales.

The satellite images on this page were prepared by Pierre Markuse and Stef Lhermitte. You can follow them on Twitter by clicking on their names. They are both tracking the progress of A68a.