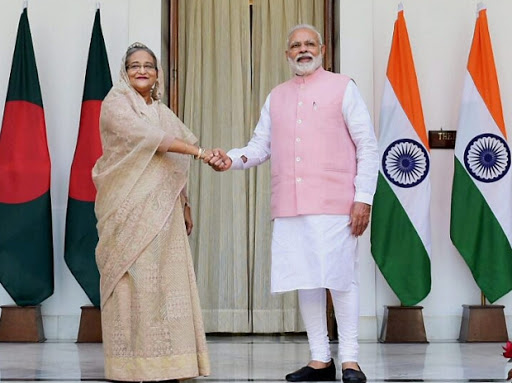 Prime Minister Sheikh Hasina and her Indian counterpart Narendra Modi will hold comprehensive discussions on the entire spectrum of the bilateral ties at a virtual summit today.

During the meeting, the two leaders will comprehensively discuss different bilateral issues, including further strengthening of cooperation in the post-Covid era, diplomatic sources said.

The summit, which will begin at 11:30am, will be preceded by a signing ceremony of nine Memorandums of Understanding (MoUs) and Protocols. A joint statement will be issued by the two countries.

Foreign ministry officials said as many as nine MoUs on different sectors are likely to be signed during the meeting. Officials are still working to finalise the deals. The two sides have already finalised four MoUs.

The two premiers on the virtual platform will witness the reopening of an old railway link, Chilahati-Haldibari rail route, after 55 years since it was snapped during the India-Pakistan war in 1965.

The officials also said the Bangladesh side will raise all major bilateral issues that include water sharing, COVID cooperation, untoward incidents along border, trade imbalance, connectivity, power swap and the Rohingya crisis.

They further said the issue of water sharing in common rivers will figure prominently in the summit when Dhaka will seek to bring the issues of seven major trans-boundary rivers -- Monu, Muhuri, Gomti, Dharla, Dudhkumar, Feni and Teesta -- under a single framework.

The Bangladesh side is expected to propose holding a ministerial-level Joint River Commission (JRC) meeting soon to finalise the comprehensive framework to resolve the water-sharing issue.

Ties between Bangladesh and India have witnessed a significant upswing in the last one decade and both sides have scaled up trade and economic engagement besides implementing a number of connectivity and infrastructure projects, they said.

The bilateral cooperation in the COVID-19 pandemic is expected to be top on the agenda at the summit and the talks between the two prime ministers will reinforce the understanding of vaccine issues.

Beximco Pharma already signed a deal with India’s Serum Institute on November 5 for the priority delivery of 30 million doses of prospective Covid-19 vaccine to Bangladesh.

Officials said Bangladesh will seek India’s enhanced engagement in resolving the Rohingya crisis at the United Nations as Bangladesh extended its support for its temporary membership at the UN Security Council this year.

“We want voluntary and sustainable repatriation of Rohingya people to their country of origin immediately. We believe as a non-permanent member of the United Nations Security Council, India can play a meaningful role in this regard for establishing stability in the region,” State Minister for Foreign Affairs Md Shahriar Alam said.

They said Bangladesh currently procures the electricity generated in India while it now wants to market its own electricity in possible cases to India and with their cooperation to a third country like Bhutan, which was willing to buy the power.

Both India and Bangladesh have continued to maintain regular exchanges at the highest level and referred to Sheikh Hasina's official visit to India in October last year and Modi's video message on the historic occasion of 'Mujib Barsho' in March.

Bangladesh is commemorating 2020-21 as 'Mujib Barsho' on the occasion of the centennial birth anniversary of Father of the Nation Bangabandhu Sheikh Mujibur Rahman. Dhaka has invited the Indian premier to join the celebrations of 50 years of Bangladesh’s independence on March 26, 2021.