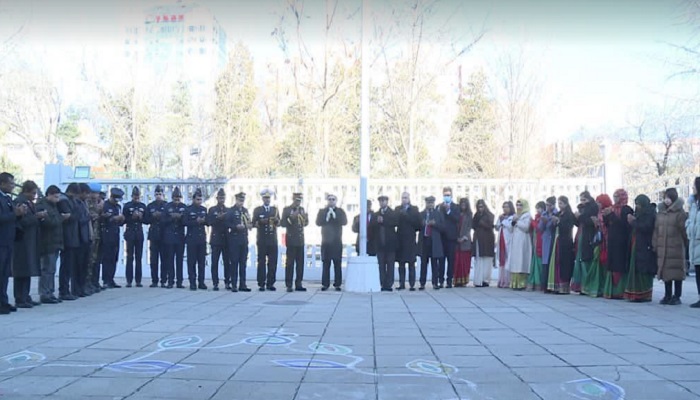 Bangladesh Embassy in Beijing observed the 50th Victory Day of Bangladesh in a befitting manner.

The day’s programme was initiated through the hoisting of national flag amid the national anthem by Bangladesh Ambassador to China Mahbub Uz Zaman.

A one-minute silence was observed to pay deep homage and rich tribute to the Father of the Nation, Bangabandhu Sheikh Mujibur Rahman, martyred freedom fighters and three million Bangalees including to the hundreds of thousand women and children who suffered ignominy.

A prayer was conducted for the salvation of the departed souls of the Father of the Nation and his family member. Prayer was offered for the freedom fighters and also for the peace, stability and progress of the country.

Ambassador Mahbub Uz Zaman along with Embassy officials and guests laid down a floral wreath before the portrait of the Father of the Nation Bangabandhu Sheikh Mujibur Rahman.

During the inaugural events of the Victory Day, all Embassy diplomats, officials and their spouses including Bangladesh community members were present.

At the outset of the Webinar Discussion, messages from Hon’ble President, Hon’ble Prime Minister, Hon’ble Foreign Minister and Hon’ble State Minister for Foreign Affairs were read out.

In the Webinar Discussion, Ambassador Mahbub Uz Zaman paid deep reverence to the Greatest Bangalee of all time, Father of the Nation Bangabandhu Sheikh Mujibur Rahman for his visionary leadership for the emergence of Bangladesh as an independent country.

He highlighted the significance of the historic day while delineating the role of the government to uphold the spirit of liberation war by advancing Bangladesh into a progressive middle-income country by the vision 2021.

He lauded the visionary leadership of the Prime Minister Sheikh Hasina for transforming the Bangladesh economy towards attaining the SDGs and turning Bangladesh into a developed country by the year 2041.

Chinese Ambassador to Bangladesh Li Jiming joined the event from Dhaka via Zoom-link as a Special Guest. He congratulated Bangladesh for the Victory Day while paying rich tribute to Father of the Nation Bangabandhu Sheikh Mujibur Rahman for his visionary leadership and leading his country and people towards independence.

He highlighted the supreme sacrifices made by the Bangalees during the liberation war. He held that China also experienced similar hardship and suffering during its long struggle for rapid development and economic emancipation of its populace.

He paid rich tributes to the martyrs of the liberation for their heroic roles. He termed China-Bangladesh relations “impressive” and expressed confidence that it will be much strengthened in the coming days. He stated China would be ready to expand cooperation as ‘one of the largest development partners of Bangladesh’. He lauded Bangladesh’s economic progress during the pandemic and held that Bangladesh has demonstrated successful measures against Covid pandemic.

Professor Xu Baofeng of the Beijing Language and Culture University hailed the martyrs of the liberation war and congratulated Bangladesh and its people on this great day.

In his speech, he underscored the need to foster friendship among people to people and between universities of Bangladesh and China.

He stressed the need to engage in literary collaboration in the domain of ongoing initiatives taken to translate classics between the two countries.

Being fluent Bengali speakers, their speech enlivened the event, while they all highlighted the ongoing excellent bilateral relations between Bangladesh and China, while extending greetings of Victory Day.

Community speaker Shamsul Haque also spoke delving into the historical significance of the day while Defense Attaché Mahbub ul Alam delineated the importance of the day in the light of Bangladesh and China relations.

Brigadier General Mahbub ul Alam also delivered the Vote of Thanks, while Deputy Chief of Mission Masudur Rahman conducted the event. A documentary on historic 7th March Speech of Bangabandhu was screened.

The morning event of the Victory Day was attended by the embassy officials, trainee Bangladesh Air Force Officials, spouses of the diplomats and officials, local Bangladesh expatriates and Chinese guests.

In the Evening Event of the Victory Day, the Embassy organized a cultural evening followed by reception. The one-hour long cultural event featured songs in chorus on Bangladesh’s soul and spirit based on the glorious liberation war.

Besides, three dance scores were performed each of it demonstrated a vibrant and picturesque Bangladesh full of life and harmony, thriving for peace and progress.

Former Chinese Ambassador to Bangladesh Chai Xi attended the Cultural Programme in the evening as a special guest.

Top representatives from major Chinese companies doing business or investing in Bangladesh were invited alongside journalists (from China Daily, People’s Daily and Global Times online), academia, intelligentsia, Chinese students and Bangladeshi students/expatriates living in Beijing. The attraction of the cultural programme was that children of the officials and staff of the Embassy spontaneously took part in the event.