I had set the surrender stage at Race Course: Indian Brig 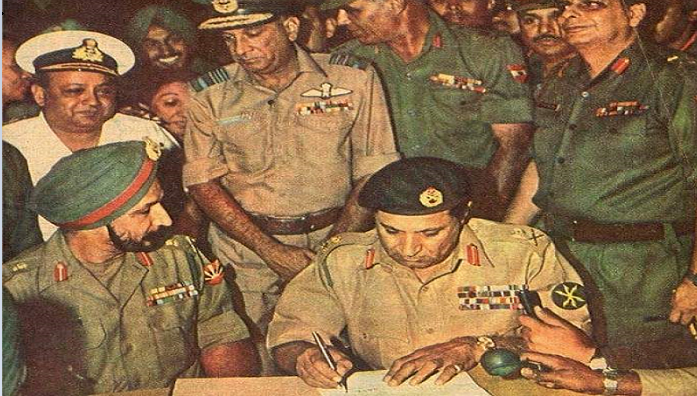 Bangladesh emerged as the free capital of an independent nation as Pakistani military commander Lieutenant General AAK Niazi signed the document conceding defeat in world’s first ever such surrender ceremony in public on December 16, 1971.

But it remained largely unknown how the stage was set in haste and who was entrusted with the task until 2012 when an Indian war veteran, Brigadier General Sant Singh, told BSS reporter he was the man who arranged the ceremony.

Singh, whom the freedom fighters in 1971 fondly called “Brigadier Babaji” because of his attire – typical Shikh turban and beard and affectionate attitude – was talking to this reporter on the sidelines of a ceremony in Dhaka where he along with several other foreigners were awarded with “Friends of Liberation War Honour”.

Singh, who was 94 at that time, recalled that as the Pakistani commander agreed to surrender in talks with India’s eastern command’s general staff chief Major General JFR Jacob at Dhaka Cantonment, he was asked to arrange the event at the Racecourse.

“I thought a table and two chairs will be needed for signing the ‘instrument of surrender’ and so I looked around for a suitable table and the chairs at General Niazi’s office,” Singh said.

“I saw the table and grabbed it along with two chairs and rushed to the Racecourse Maidan.”

The nonagenarian general, however, looked at this reporter with smile and a little surprise gesture as, of all the important things, why he was being asked about the “table and chairs”.

Singh said he did not get enough time to select the suitable corner at the Racecourse to set the simple makeshift stage and ensure the security.

Years later, Liberation war time K Force commander and liberated Bangladesh’s first army chief General Shafiullah, told this correspondent that he was asked to set the stage at Racecourse but as he reached there “I saw the task has been done already”.

“Till today I have no idea who did it,” he said and when this reporter told him the Singh’s story he smiled with amusement.

Singh, a recipient of India’s top gallantry award Maha Vir Chakra (MVC) twice, said he had carried out another crucial task of interrogating Niazi in line with intelligence requirements immediately after the surrendering ceremony.

“We needed to interrogate him for quite a long time on that evening for military requirement or security reasons . . . to know about the location of his troops, their previous plans etc,” said Singh.

Later, he said, Niazi was brought to his residence by the Indian troops “and I went to his home (at cantonment) too”.

“I deployed 30 Indian soldiers to guard the house . . . we were concerned he could flee away as on the previous night several high ranking Pakistani military officers fled the country in helicopters through Burma,” he said.

The citation of the Bangladesh’s honour awarded to him pointed that as commander of the Indian military’s FJ Sector in 1971, Singh was fondly called as “Babaji” by the freedom fighters whom he trained for the war.

“After capturing Mymensingh he advanced towards Dhaka via Modhupur and reached Dhaka on 16 December before the surrender of the Pakistani Army. He always led his troops from the front,” read the citation.

“The most memorable moment was the liberation of Dhaka . . . this is the biggest achievement of my career,” he told BSS.

Singh was awarded with the second MVC after he captured Mymensingh and Madhupur in Bangladesh while he was leading with just one infantry battalion against two of the enemy.

The citation acknowledged his boldness and decisiveness during the time of liberating Dhaka.