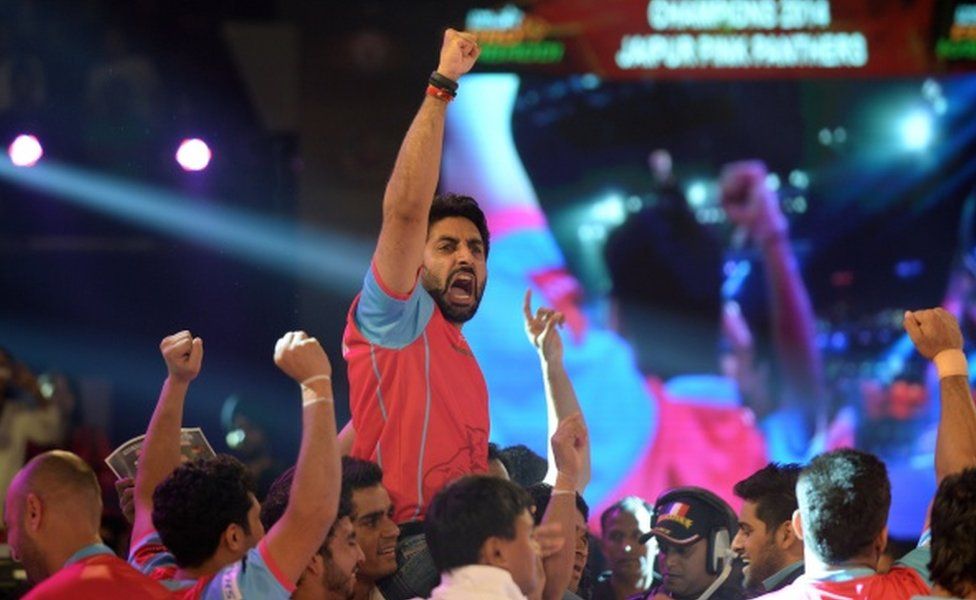 For more than six months in 2019, award-winning British director Alex Gale followed a team of players of kabaddi, a traditional fast-paced contact sport played by millions of Indians.

Gale was covering Jaipur Pink Panthers, a professional kabaddi team owned by Bollywood star Abhishek Bachchan. His series, Sons of the Soil: Jaipur Panthers, which premiered on Amazon Prime Video last week, is a fascinating peek into the transformation of a traditional game into a highly competitive and popular spectator sport.

"We were trying to show the new glamour that has been brought to the sport but also celebrates the heritage and roots of the sport that make it so desi [indigenous.]. We have really tried to capture what makes kabaddi unique and attractive to more and more people in and outside India," Gale told the BBC.

The "new glamour" has helped. The six-year-old made-for-TV professional league had transformed the game and made kabaddi the second-most watched sport in India after cricket. It has transformed the lives of many of its players, who come from humble backgrounds in villages and small towns.

Players for 12 teams - the league began with eight teams in 2014 - are picked up at auctions and managed professionally. They are togged out in colourful jerseys and play 40-minute games on rubber mats in packed arenas under bright lights and accompanied by music and pyrotechnics. Boisterous fans in attendance often include Bollywood and cricket stars.

More than 400 million people watched the game on TV during the inaugural season. "A working class game has been successfully transformed into a TV sport," says Joy Bhattacharjya, a sports producer.

# Kabaddi is a full-contact team sport originating in India
# Two teams take turns to send a "raider" to the other's territory, or half
# The player has to tag any one of the opposing team's four "stoppers" and return "home" within 30 seconds to win the raid
# If not the stoppers win the raid
# The objective is to win as many points as possible either through raiders or through stoppers
line

"I get to live vicariously through my team," Bachchan says in the film. Jaipur Pink Panthers were the inaugural champions in 2014 and remain one of the league's most popular teams, despite not winning another title.

Gale's camera follows the actor and his team in hotels, tour buses and at heated practice sessions and frenzied games, with Bachchan himself, his father superstar Amitabh Bachchan and actor wife Aishwarya Rai Bachchan in the stands. Popular sports and Bollywood feed off each other in India.

Gale says the series was a personal journey into the roots and the makeover of the game in India.

In rural Haryana, he filmed a big kabaddi tournament at a rural fair. At team member Deepak Narwal's house, they were fed home-made ghee (a type of clarified butter that originated in India) with his parents, a family "living and breathing the sport" in kabaddi's heartland. He filmed several hundred army cadets watching a game on TV on a jumbo screen, a "special experience" when he was also trying to follow Ben Stokes and England chase down a stiff target against Australia back home in a cricket Test match.
Gale films a prominent player of Bachchan's team who's recuperating after injury at home in his village in Haryana in north India. His mother is giving her son a head massage.

"Is Abhishek taking care of you," she asks his son.

"Why would he do that?" he says, smilingly.

"He should take care of his players," she replies, deadpan.

The series shows how the game has now become a passport to upward mobility for thousands of players in villages and small towns. Players have bought homes, cars and appliances with earnings from kabaddi. And with foreign players participating in the league, "the melting pot of languages and cultures are so great to see". A Korean player in the Jaipur team often becomes the subject of curiosity.

Kabaddi has come a long way in India since it played a role in India's independence struggle. Mahatma Gandhi supported the game and wrote articles on its benefits.

In his book Kabaddi By Nature, Vivek Chaudhary, a sports journalist, tells the story of a group of Indian kabaddi players-cum-freedom fighters from a club in Maharashtra who travelled to the 1936 Berlin Olympics to demonstrate the sport at an exhibition game and ended up meeting Adolf Hitler.

"The invitation came about because of a friendship that was formed by one of the kabaddi players who was sent to Berlin in the early 1920s to study sports as part of attempts to make Indian youth fitter and stronger so they could drive out the British. He ended up becoming close friends with Dr Carl Diem, organiser of the Nazi Olympics," Mr Chaudhary writes.

The professional league has now made kabaddi a commercially viable and intensely competitive game with the highs and lows that come with it. "I ask myself why do I put myself through this. The agony, the ecstasy, the highs and the lows, and the heartbreak," Bachchan says in the film.