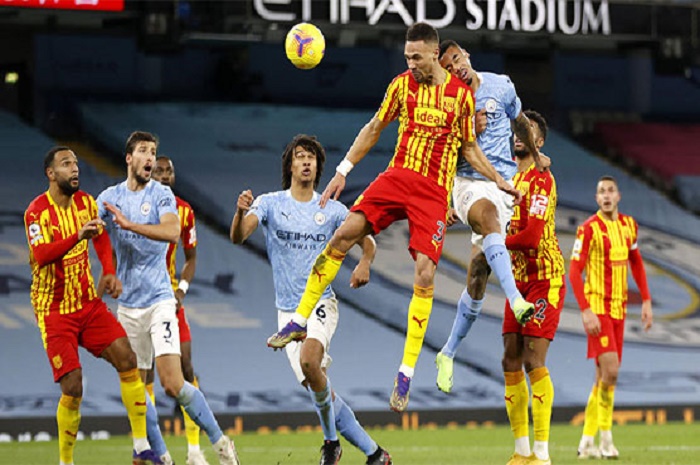 Manchester City's faltering Premier League title challenge suffered another setback on Tuesday as lowly West Brom held out for a 1-1 draw at the Etihad.

City could have moved to within three points of leaders Tottenham and Liverpool, who face each other on Wednesday, but threw away two points against the side sitting second bottom of the table.

Ilkay Gundogan opened the scoring for Pep Guardiola's men but Ruben Dias's own goal just before half-time proved costly as City's problems in front of goal continued in a goalless second-half despite a siege on the West Brom goal.

A point edges City up to fifth on goal difference, while West Brom move to within two points of safety at the other end of the table.

The stale domination that has characterised a lacklustre season from City was in evidence all night as they struggled to break through West Brom's deep-lying defence.

Guardiola's side were criticised for a pedestrian performance in a 0-0 draw at Manchester United on Saturday, but at least at Old Trafford the Catalan coach could point to being wary of United's pace on the counter-attack.

West Brom had the first big chance of the game when the ball ricocheted off Joao Cancelo into the path of Karlan Grant and he forced Ederson into a fine save low to his left.

City's probing was finally rewarded on the half hour as Raheem Sterling got to the by-line and his cut back was fired home from the edge of the area by Gundogan.

Guardiola's men shot themselves in the foot by conceding for the first time in seven games two minutes before half-time as they failed to clear a free-kick into the box and Semi Ajayi's shot was deflected into his own net by Dias.

It was one-way traffic after the break as City set up camp in the West Brom half but lacked the imagination or pace to open the visitors up.

Kevin De Bruyne was the most likely candidate to produce the inspiration his side needed but twice Sam Johnstone in the West Brom goal denied the Belgian with low saves to his left.

Guardiola brought City's all-time record scorer Sergio Aguero off the bench for the final 15 minutes, but the Argentine's lack of match sharpness after a series of injury problems showed as he slashed wide the sort of chance he has so often buried.

Johnstone produced two stunning saves in stoppage time from close range headers by Gundogan and Sterling to earn his side a point as City paid for their profligacy in front of goal.